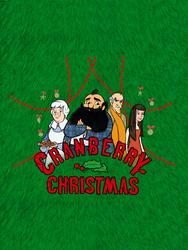 Cranberries have become as much a part of holiday traditions as ice skating and decorating the tree, said Ken Romanzi, chief operating officer of Ocean Spray. We have taken a story that is near and dear to Ocean Spray's heart and brought it to life to share with other families, and we hope that 'Cranberry Christmas' will take its place as a perennial holiday favorite.

Ocean Spray has created the animated show as a special gift to consumers, commercial-free. The show is based on the classic 1976 children's book of the same title, written and illustrated by Wende and Harry Devlin. ''Cranberry Christmas'' features two new original songs performed by the legendary Grammy® Award-winning singer/songwriter, Barry Manilow. With worldwide sales of more than 75 million records and dozens of hit songs, music superstar Barry Manilow co-wrote the two songs with longtime collaborator Bruce Sussman.

"Cranberries have become as much a part of holiday traditions as ice skating and decorating the tree, said Ken Romanzi, chief operating officer of Ocean Spray. We have taken a story that is near and dear to Ocean Spray's heart and brought it to life to share with other families, and we hope that 'Cranberry Christmas' will take its place as a perennial holiday favorite."

'Christmas Is Just Around the Corner' has been released as Manilow's Christmas single for 2008. ''It's the first original holiday single from an animated TV special in decades,'' said Rick Ungar, executive producer of the special and former president of Marvel Productions. "I look forward to it being played for decades as well.''

''We were moved by this lovely children's story because it celebrates the importance of community as well as the simple pleasures of the holiday season," said Manilow. "The songs we wrote for this television special reflect the themes of the story, which we hope will help viewers step back from the holiday hustle and bustle and get in touch with the true spirit of the season.''

''Our brothers and sisters are absolutely thrilled to see our parents' work revived and come to life after a long period of quiet,'' said a Devlin family member. ''For over 30 years we have thought Ocean Spray would be the perfect partner, and now here we are. Our parents would be overjoyed with the faithful and creative TV version of this humorous and colorful tale, with its message of forgiveness and love for the holiday season.''

Story Synopsis
Set in the fictitious town of Cranberryport, the story begins three days before Christmas when grumpy old Cyrus Grape forbids children to play and skate on the ice over the local cranberry bog near his home.

Young Maggie, along with her grandmother and their friend Mr. Whiskers, work together to save Christmas Day for the children by reclaiming their favorite ice skating spot and discovering the land's rightful owner.

When Mr. Whiskers learns his sister is coming to visit, it's a scramble to get his house in order and Maggie and her grandmother pitch in to help clean the old house. While working, they uncover a hidden box that holds a surprise for everyone…

Maggie and her grandmother make delicious cookies to serve at their Christmas feast. For recipes, visit http://www.oceanspray.com.

About Ocean Spray
Ocean Spray is an agricultural cooperative owned by more than 600 cranberry growers in Massachusetts, Wisconsin, New Jersey, Oregon, Washington, British Columbia, and other parts of Canada as well as more than 50 Florida grapefruit growers. Ocean Spray was formed over 75 years ago by three cranberry growers from Massachusetts and New Jersey. Florida grapefruit growers joined the Cooperative in 1976. Ocean Spray is North America's leading producer of canned and bottled juices and juice drinks, and has been the best-selling brand name in the canned and bottled juice category since 1981. Ocean Spray posted fiscal 2007 earnings of roughly $1.7 billion.