Douglas Gresham, stepson of the beloved writer and executive producer of the Narnia films, will answer questions during one-hour live session with fans. 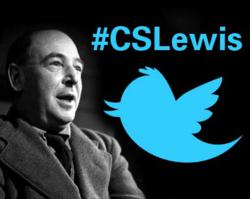 A one-time opportunity for anyone who has questions or thoughts about the life and legacy of C. S. Lewis, this Live Twitter Chat with Douglas Gresham is not to be missed.

HarperOne, in collaboration with the estate of C. S. Lewis, announces the first-of-its kind event with Douglas Gresham, stepson of the celebrated author.

Beginning at 2:00pm Eastern Time on Wednesday, November 16, fans worldwide can engage with Gresham, tweeting from London, during an hour-long live chat. Answering questions via twitter tagged with #CSLEWIS, Gresham will provide rare insights into Lewis as a man, a writer, and a thinker who continues to influence and shape ongoing conversations about faith and life.

A one-time opportunity for anyone who has questions or thoughts about the life and legacy of C. S. Lewis, this Live Twitter Chat with Douglas Gresham is not to be missed.

Additionally, leading up to the November 16 event, followers of @CSLewis will be eligible for daily giveaways of C. S. Lewis books and products to followers — including box sets of The C. S. Lewis Signature Classics, Mere Christianity, The Screwtape Letters, The Great Divorce, and many more. Over 200 books will be given away to @CSLewis followers over the next few weeks, and a free C. S. Lewis e-booklet is also available for download at http://on.fb.me/CSLEWIS through November 22.

For more information—including instructions on how new Twitter followers can join this important conversation—please follow hashtag #CSLewis or go to http://tweetchat.com/room/cslewis during the live event.

About Douglas Gresham
Douglas Gresham is the son of Joy Davidman, who later married C. S. Lewis. As a boy, Gresham lived at "The Kilns," the Oxfordshire home Lewis shared with his brother Warnie, and then Davidman. After many years in Tasmania, Australia, he now lives in Malta.

About C. S. Lewis
Clive Staples Lewis (1898–1963) was one of the intellectual giants of the 20th century and arguably the most influential Christian writer of his day. His major contributions in literary criticism, children's literature, fantasy literature, and popular theology brought him international renown and acclaim. He wrote more than thirty books, allowing him to reach a vast audience, and his works continue to attract thousands of new readers every year. His most distinguished and popular accomplishments include The Chronicles of Narnia, The Screwtape Letters, and Mere Christianity.

About HarperOne
HarperOne, a division of HarperCollinsPublishers, strives to be the preeminent publisher of the most important books and authors across the full spectrum of religion, spirituality, and personal growth literature, adding to the wealth of the world’s wisdom by stirring the waters of reflection on the primary questions of life, while respecting all traditions.