The Computer Voice Stress Analyzer (CVSA) made by the National Institute for Truth Verification (NITV) consistently provides more reliable results that cannot be defeated by manipulation or countermeasures. 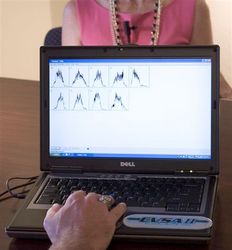 Although widely acclaimed in the law enforcement community, the CVSA is regarded as a threat by the entrenched polygraph establishment as it displaces both them and their technology. Despite this heavy resistance, the CVSA has built an impressive 20-year track record as an investigative tool helping to solve tens-of-thousands of crimes worldwide and helping many innocent people along the way

Nearly a year and a half after the conviction of John Couey for the kidnapping, rape and murder of nine-year-old Jessica Lunsford, it has been revealed that one of the two initial suspects, the little girl's father, could have been cleared as a suspect nearly an entire month earlier had all the investigating agencies relied on the more accurate results of the Computer Voice Stress Analyzer® (CVSA) rather than the old polygraph test.

The National Institute for Truth Verification (NITV), http://www.nitv1.com, the developer and sole source for the CVSA, says the old polygraph can be unreliable and inaccurate, whereas results of the CVSA are consistently accurate, verifiable and repeatable. Further, the CVSA can not be defeated by countermeasures, whereas the ability to manipulate and defeat the old polygraph is one of its major flaws. According to Chief Bill Endler, NITV Director of Law Enforcement and Training, "Lt. David Wyllie at the Citrus County Sheriff's Office headed the Special Victims Unit at the time of Jessica's disappearance. As a seasoned CVSA examiner, he administered the first truth verification test regarding Jessica's disappearance -- a CVSA examination -- which showed that Jessica's father had no knowledge of the crime."

Endler also reported that when the Florida Department of Law Enforcement (FDLE) and the FBI entered the investigation, both agencies demanded to conduct separate polygraph tests of Jessica's father. The first, which was administered by the FDLE, resulted in an evaluation of "Deception Indicated." The second polygraph administered by the FBI was evaluated as "Inconclusive." Unfortunately, it wasn't until Couey was caught 25 days later and confessed to Jessica's abduction and murder, that the FDLE and FBI polygraph results were proven wrong.

On the other hand, he says, law enforcement agencies that have adopted the latest in 21st century truth verification technology -- the CVSA -- have avoided such inaccurate results. In fact, Lt. Wyllie and other examiners at the Citrus County Sheriff's Office report that the CVSA has been so accurate over the past 15 years that the results from the CVSA are routinely solicited and accepted by the courts and attorneys in their area.

The CVSA accurately scores each voice pattern for stress levels and then evaluates the entire examination to render a 'No Deception Indicated' or 'Deception Indicated' result, thus scientifically eliminating possible bias from the truth verification process through the use of advanced and patented algorithms. Since the release of the CVSA II in early 2007, over 950 CVSA II's, a new more advanced version of the CVSA, have been delivered. "In over 1,800 law enforcement agencies across the United States, including the California Highway Patrol, Nashville P.D. and the Atlanta P.D., this is an investigative tool that has proven itself as invaluable in the field," states Harry Bennigson, a retired Vallejo P.D. (CA) detective and currently Executive Director for the National Association of Computer Voice Stress Analysts. Once restricted for sale only to law enforcement, a special version of the CVSA is now available for some non-law enforcement applications. To watch a 2 minute video about the CVSA, visit http://www.impactmovie.com/nitv/ .

"Although widely acclaimed in the law enforcement community, the CVSA is regarded as a threat by the entrenched polygraph establishment as it displaces both them and their technology. Despite this heavy resistance, the CVSA has built an impressive 20-year track record as an investigative tool helping to solve tens-of-thousands of crimes worldwide and helping many innocent people along the way," says Endler.

Military Version of the CVSA