Mr. Dad.com and GreatDad.com have announced that submissions are now open for the Mr. Dad Seal of Approval and GreatDad Recommends Award and are due by November 24, 2010. The awards are given to products, in seven categories, that promote or enhance the relationship between dads and kids. 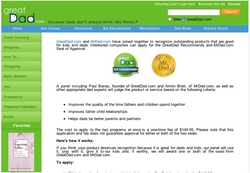 Mr. Dad.com and GreatDad.com have announced that submissions are now open for the Mr. Dad Seal of Approval and GreatDad Recommends Award, which will be announced in early December.

The Mr.Dad Seal of Approval and GreatDad Recommends awards were launched to recognize products and services, including toys, that enhance or promote interaction between dads and kids. Awarded quarterly, the seals provide consumers an easy way to identify products and services that reinforce the parent/child bond.
“We are excited to open up the new applicant process for the Seal of Approval and GreatDad Recommends Awards. We hope that by acknowledging the tremendous work these companies are doing to create products and services that help support family involvement, we can support their growth and raise awareness of ways dads can get more involved with their kids,” said GreatDad’s Paul Banas.

Given the holiday timing of these awards, a special emphasis will be put on toys and games that bring the whole family together and which dads really will want to get down on the floor and play.

Winners receive endorsements on GreatDad.com and MrDad.com, the two leading leading parenting websites for dads, and can be used in advertising and on packaging. Those interested in applying for the awards should visit http://www.greatdad.com/recommends for more information. The applications deadline is November 24, 2010. Holiday winners will be announced December 6, 2010.

“The joint awards identify products that help enrich families by fostering father-child bonding. Teaming with GreatDad.com allows recipients of the awards double the opportunity for increased product recognition,” said Armin Brott, founder of MrDad.com and author of eight best-selling books on fatherhood, including the recently released third edition of The Expectant Father: Fact, Tips and Advice for Dads-to-Be.

A panel of dad experts will judge products or services based on whether a product:

About MrDad.com
Headquartered in Oakland, California, MrDad.com, along with founder, Armin Brott, has helped millions of men around the world become the fathers they want to be. The author of eight bestselling books on fatherhood, Armin also writes the nationally syndicated newspaper column, “Ask Mr. Dad,” and hosts the syndicated “Positive Parenting” radio show.

About GreatDad.com
Headquartered in San Francisco, California, GreatDad.com is a leading source of experience, recommendations, inspiration and advice for dads – delivered from the male perspective. GreatDad.com has the only weekly pregnancy newsletter written for dads.