Duran’s newly published autobiography, “The Suffering of Chasing Dreams,” details the most harrowing and the most fulfilling experiences in his life to empower readers 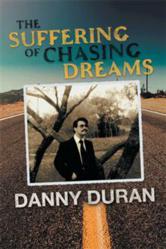 For people who have enjoyed powerful, life-changing stories in books like Proof of Heaven by Dr. Eden Alexander and Divine Revelations of Hell by Mary K. Baxter, and movies such as Forrest Gump or Walking Tall, comes a remarkably compelling true story of suffering transformed into tremendous success. Successful entrepreneur, actor and author Danny Duran reveals secrets in transforming suffering to success in his new autobiography, The Suffering of Chasing Dreams.

This story is about a young boy who suffered—and still suffering—chasing dreams and facing a lot of suffering along the way, and how he achieved most of his dreams. After 55 years of his life, he came to find Jesus Christ even though he came from an extremely dysfunctional family, feeling rejected, not loved, was sexually, physically, and verbally abused.

Danny suffered extremely. As a boy, he faced the nasty words from his father like, “You are way too stupid and black and ugly. You’ll never amount to anything!” At the tender age of 10, he was put into the juvenile hall for incorrigible boys. He also spent five years in prison. Later on, his partner, Jane P. Peterson, was killed in an arrest attempt. His son was shot, and his house was bombed. He had been shot and stabbed multiple times and was left in a coma for seven days in an attempted arrest as a bounty hunter.

His secret has simply his newfound faith, the people who have loved and supported him, and his unwavering determination. All these helped him to eventually transform his stumbling blocks into stepping stones in life. It began with those nasty words from his father which motivated young Danny to execute his dreams. Slowly but surely, his trials and tribulations became the very reasons for his triumphs in chasing dreams.

His greatest secret of all was his personal relationship with the Lord Jesus Christ. In prison, he found God and his ordained minister wife, Dharma, who came to minister to seven hundred inmates there. While in a coma also, he had his second Christian spiritual experience with God; his first being in the juvenile hall years earlier.

The Suffering of Chasing Dreams may seem like fiction or something out of a movie script. However, the truth is that 95 percent of what people will read in this book is true. All of the names have simply been changed to protect the innocent. Duran has shared his story so that other suffering people out there may learn from his example. He says, “If you really and truly want God in your life, you owe it to yourself to read this book.”

About the Author
Author info