Director goes for crowd funding through Kickstarter for “Snap Shot” and grabs plenty of attention with a clever video promo featuring the Mexican Badass himself, who says "I support independent film." 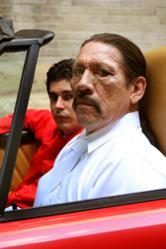 I love independent film. And I know you do too. Right?

Through Kickstarter, more than 750,000 people have pledged over 75 million dollars to fund independent film projects since 2009. Recently Kickstarter teamed up with the Sundance Institute's Artist Services to provide creative funding for the Institute's alumni. Director Frankie Latina and writer Gilbert Trejo, worked through the Sundance Institute Artist Services curated page on Kickstarter to raise funding for their project. Frankie Latina Motion Pictures announced today that shooting is gearing up in Milwaukee, Wisconsin and is slated to shoot later this spring.

In SNAPSHOT, a young photographer finds a roll of film in an old camera that contains images he soon wishes he'd never seen. At first intrigued and determined to find out more about the pictures, he comes to the attention of the people to whom the camera belongs and the young photographer is drawn into their deadly world—a world from which they most definitely don't want him to escape.

'I love finding unknown, talented directors. I don't understand why more big name actors don't do it. Because the unknown guy you work for today, in three years he's got his own studio. And that's paid off for me more than once." Trejo said. "Working on Modus Operandi with Frankie was a lot like working with Robert Rodriguez. Guys like that have an incredible vision and I'm excited to see what Frankie
does with this story."

Trejo and Latina appear in a sharp little promo video on the Kickstarter page for Snap Shot. It can be viewed at Snap Shot Promo

Latina has been named one of the 25 new faces of independent cinema, as well as receiving other accolades for his debut feature “Modus Operandi” which bowed at AFI. This film, as in Latina’s previous works, will feature a rich palette of vibrant colors, dynamic symmetrical compositions, stylish fashions and preternatural attention to razor-sharp details.