A World on the Brink of Violent Change… When an intelligent virus and an intelligent machine community conspire to threaten the world with destruction and chaos, the only person who can save humanity is the woman who caused the cataclysm in the first place. 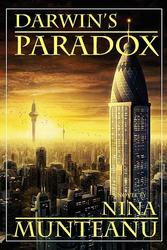 Munteanu asserts her mastery of the sensual SF romantic thriller. An unforgettable read that's immensely alluring, surprising, and heart throbbing. The vivid intimate details, colorful descriptions, and wonderfully drawn characters leave one breathless and asking, when and where is the next book coming out?

Darwin's Paradox--a book that explores humanity's evolution through our relationship with nature and machine ... What would happen if they came together?

In today's multiplex world of rapid planetary change, the lines between biology and technology are swiftly blurring in wondrous and equally terrifying ways. We are witnessing an increase in studies that link a growing infertility in humans to industrial activities and urban lifestyles. Yet, those of us who are born today can expect to live with enhanced intelligence, longevity, and health thanks to technological advances such as neuromorphic engineered implants, nano-A.I. medicine and other biotechnological advances.

Co-evolving with our exploitation of the world's ecology is the spread of emergent and resistant diseases. Futurist Michio Kaku suggests that because of the rampant use of anti-biotics "our own bodies have become a Darwinian battleground where only the nastiest mutant strains of bacteria thrive." Yet, Doctor Lynn Margulis proved the notion that cellular evolution of virus and host cell may evolve through cooperation, often into a single symbiotic entity (e.g., evolution of eukaryotic cell). Virologist Frank Ryan states that "every monkey, baboon, chimpanzee and gorilla is carrying at least ten different species of symbiotic virus." And, while Lynn Margulis argues that a virus is intelligent, Transhumanist Ray Kurzweil predicts the inevitability of self-aware sentient robots.

In her book, Darwin's Paradox (Dragon Moon Press) ecologist, educator and acclaimed author Nina Munteanu explores the frightening prospect of an intelligent self-organized virus joined with a self-aware A.I. in a world preoccupied with issues of infertility and the residual effects of an industrial plague.

Driven by an ambitious virus stirring inside her, Julie Crane sets out on a quest to save her family from the clutches of a terrified government. Instead she's abruptly caught in a web of intrigue...one that will betray her identity as Darwin's Paradox and define the evolution of humankind.

Says Doctor Rhonda Low, host of "Your Health"--CTV News, and Clinical Associate Professor in the Dept. of Family & Community Medicine, University of British Columbia: "Loved Darwin's Paradox! ... A good neurology refresher for me! ... The story is intricate ... imaginative, and intelligent ... The medical and scientific (premise is] ... completely plausible and perhaps our fate ... Sign me up for 'neurgery'."

"Munteanu [has] created an inventive and exciting future ... a mystery virus ... unsettling artificial intelligences ... and an indomitable hero," says Kay Kenyon, SF author of Bright of the Sky.

Darwin's Paradox is Nina's third novel. Her previous fiction was nominated for the Gaylactic Spectrum Award, Ecataromance Reviewers' Choice Award, the Aurora Prix, and the Foundation of Speculative Literature's Fountain Award. Praise for her previous fiction has been generous.

Tangent Online calls Angel's Promises "A stunning example of good storytelling with an excellent setting and cast of characters." Of her first novel, Collision with Paradise, Romantic Times says, "Munteanu presents a very intelligent story, with fantastic world-building...an intriguing tale." Another Book Review Site said, "Munteanu asserts her mastery of the sensual SF romantic thriller. An unforgettable read that's immensely alluring, surprising, and heart throbbing. The vivid intimate details, colorful descriptions, and wonderfully drawn characters leave one breathless and asking, when and where is the next book coming out?"

Nina holds a Masters Degree in Ecology from Concordia University (Montreal) and has taught university courses at Simon Fraser University, Douglas College and the University of Victoria. She has published over fifty scientific papers, technical reports and guides, including a controversial paper on "creative destruction", which uses chaos theory to explore nature's intelligence. Nina conducts research in risk analysis, pollution abatement and environmental protection as senior scientist with an environmental consulting firm in Vancouver, B.C.

A Book Tour is planned for Darwin's Paradox, starting with a launch in Vancouver November 15 through 24. The tour will move to the Toronto area between November 28 and December 3. Nina's New Year Tour kicks off in Seattle, WA in January, 2008; with stops in 12 major U.S. cities.

Nina's award-winning blog, The Alien Next Door provides lively discussion on elements of science and science fiction, philosophy, and futurism, as well as spiritual and metaphysical issues.