A lawsuit has been filed alleging that the DePuy ASR hip replacement was defectively designed and that DePuy did not timely warn surgeons and patients of the high failure rate of the device. 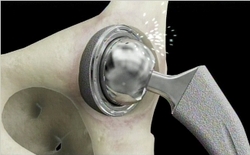 Depiction of metal debris created by less than optimal positioning of the DePuy ASR hip replacement contained in materials recently sent by DePuy to orthopedic surgeons.

The DePuy ASR Hip Replacement Alliance is a consortium of law firms that have represented patients across the nation in failed orthopedic product defect cases for many years. Member law firms of the Alliance have extensive experience in representing patients in litigation against both DePuy Orthopaedics and Johnson & Johnson's prior orthopedics subsidiary, Johnson & Johnson Orthopaedics. Clients of the Alliance will be jointly represented by the member law firms who will work together on behalf of each client. More information on the Alliance is available at http://www.mctplaw.com/depuy-asr/ or by calling 877-284-6600.