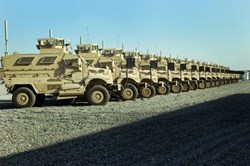 The selection furthers the companies leading position within the U.S. Army as the predominate ip-based mass notification platform postured to support the Warfighters in CONUS and OCONUS locations.

U.S. Army locations seeking to implement an EMNS solution similar to the mass notification system deployed by the U.S. Army in Afghanistan, Fort Huachuca and Fort Hood can contact Desktop Alert for a briefing and system demonstration.

The Desktop Alerting Notification System is currently in use at:

and other U.S. Department of Defense military installations worldwide.

This product has a valid Certificate of Networthiness (CON)

The alerts appear as pre-defined or on-the-fly highly intrusive computer screen alerts which force immediate attention to end-users receiving the message with instructions for the action(s) to be taken. A video, audio, image and/or verbal alerts automatically sound/appear over the computer's monitor and speakers.

Alerts are delivered across the enterprise in less than 30 seconds, NOT MINUTES. Latency-based information can be highly dangerous to the mission. Desktop Alerts unrivaled alert delivery speed and low bandwidth technology insures that actionable-intelligence is merely seconds away from end-users. The speed and efficiency of critical notification to end-users ultimately results in the success or failure of the mission.

"DoDi 6055.18 mandatory requirements for an emergency management installations require all personnel be alerted within 10 minutes or less. Desktop Alert notifies all workstation personnel in 30 seconds. That is not just exceeding the DoDi 6055.18 mandatory requirement, it is setting a new standard and to that end Desktop Alert is working hard to push the envelope" Ryan added.