Laboratory tests of the DuraspanTM catheter have demonstrated an 87% reduction in platelet adhesion and thrombus accumulation compared to uncoated catheters. 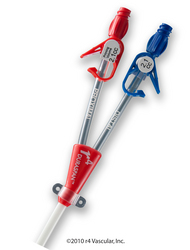 According to Kyle Smith, DO, Vascular Access Center of Southwest Louisiana, “Thrombus accumulation is one of the leading causes of failure among long-term hemodialysis catheters. Initially, thrombus may cause reduced flow rates, significantly decreasing the efficiency of even the largest catheters. Ultimately, thrombus may have catastrophic effects to the patient as it may prevent use of the venous access site for permanent forms of dialysis. My experience with DuraspanTM thus far has shown excellent performance and patency.”

R4 is committed to improving dialysis patient catheter outcomes according to r4 Vascular’s President, Don Geer, “physicians have long thought that if one was able to make the catheter less recognizable as a foreign object in the body it could revolutionize catheter-based hemodialysis. Developing the catheter, r4 Vascular engineers utilized stealth coating technologies, approaching the thrombus problem by camouflaging the catheter in a biomimetic coating.” The catheter is available in either a 3.5cm tip stagger or a 7cm tip stagger version, providing reduced recirculation.

R4 will be “launching” sales of the catheter at the S.I.R. (Society of Interventional Radiology) conference March 13th through March 18th in Tampa, FL.

The DuraspanTM hemodialysis catheter is part of r4 Vascular’s technologically-advanced portfolio of products for the vascular access marketplace. In 2009, r4 Vascular launched the Zeus™ Biomimetic Coated CT PICC which is the first non-valved PICC to receive FDA clearance for saline-only maintenance, the company also launched the Pherocious Apheresis catheter which is the first power-injectable, triple lumen Apheresis catheter.