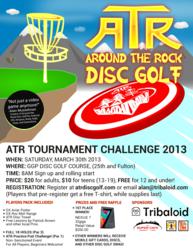 The lack of disc golf on game platforms is disheartening. I’m into disc golf for life, I play disc golf every week and will ensure our games are updated and new disc golf games are created and enjoyed by all ages.

Join Tribaloid team for a live Around the Rock Disc Golf Tournament. The ATR Disc Golf Tournament is open for all ages and located at Marx Meadows in Golden Gate Park. Starting promptly at 8am on Saturday, March 30th, registration opens and players begin the 18 hole Tournament and 18 hole putting challenge. Each hole challenges the player with having to throw the disc in the basket in three throws or less. Players with the most Aces and Birdies win prizes. 1st place winner receives a Google Nexus 7 Tablet. Everyone will have multiple chances to win at the free raffle for registered players.

New disc golf players will have the option to get a lesson from local disc golf pro, Patrick Brown who also drives the Beautification Project for improving the GGP course. Learn various putting, mid range and driving techniques from the master. Focus and play with more confidence and control, this is not a sport that involves frisbee. Throwing a disc is different and with proper technique and practice the player can throw a disc up to distances of 800ft.

ATR Disc Golf is an arcade-style, fantasy themed Disc Golf game. In Tournament mode, the player can currently choose from 2 course designs and flick a disc from a floating teepad to a metal basket floating on rock islands. Each hole has been carefully designed and developed for the player to use various hookshot techniques to get the right shot. Practice mode challenges the player to get as many Ace’s as possible and prepares them for playing in a Tournament. Tribaloid has been keen on listening to player’s feedback and adding new features when requested. Over 30 updates have been made on each platform for Around the Rock Disc Golf.

A lot of people have been asking us what’s next. We are 7 months into production on a Pro disc golf game that will mimic real life disc golf and professionals. We’ll have a teaser to show at the tournament in San Francisco for anyone interested. We look forward to meeting fellow gamers and disc golf enthusiasts, recreational, amateurs and pros alike.

Tribaloid will also be collecting sound effects for an exclusive ATR Disc Golf update and interviewing players to promote disc golf and our new upcoming disc golf game. Lucky ATR players will be able to play the game and hear their voices in the game. We hope to see you at the Tournament and happy to be outside and off the computers.

Register online before Friday and get a free ATR t-shirt! http://www.atrdiscgolf.com/