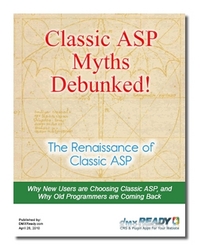 "Classic ASP has survived the test of time...it's simple to use, widely supported, it's Windows-based, and it provides users with great dynamically-generated pages. What more could users want?"

After years of being overshadowed by PHP, Classic ASP is making a comeback, said Frank Calabretta, founder of DMXReady. Do-it-yourselfers and company/governmental IT departments are the biggest users, taking advantage of its ease of use and Windows-based platform.
"Classic ASP has survived the test of time", Calabretta said. "There are literally millions of Classic ASP websites around the world, including major corporate and U.S. governmental sites."

Running Windows is a lot easier to use that Linux-based systems for organizations who run their own servers. Small business owners also tend to be more familiar with Windows than Linux systems. Now with hybrid cloud servers, it's getting even easier.

"It's become fashionable to bash Classic ASP," Calabretta said. "Of course working in Linux is no problem for hardcore web professionals. But we're supporting a different group of people: web designers and do-it-yourselfers who are familiar with Windows and don't want to learn a whole new way of doing things."

"There are literally millions of Classic ASP websites around the world, including major corporate and U.S. governmental sites," he said. "Their employees already know Windows, so why reinvent the wheel?"

Besides accessibility and ease of use, Classic ASP has a lot more going for it. Classic ASP integrates seamlessly with the latest Web 2.0 technologies like css, AJAX, JQuery, XML, and the new HTML 5.

Calabretta said that many programmers left Classic ASP or avoided it altogether because of certain myths about it. He's addressed five of these myths in a new ebook: "Classic ASP Myths Debunked" (available for free download).

Classic ASP has one other major plus that DMXReady takes full advantage of: the ability to use a Microsoft Access database. This is much easier for non-tech users - unlike PHP-based websites that require server and database setup, DMXReady users can simply upload the pre-built database so they are ready to go in minutes.

"Using a database-driven application without even touching a database, well that's a benefit that these programmers don't quite grasp," Calabretta said. "Even so, our applications are flexible enough that website owners can always move up to more robust database systems like MySQL and MS SQL."

Calabretta said he expects continued growth as users switch back from PHP to Classic ASP programming. This growth is coming from two distinct groups: new do-it-yourselfers, and experienced programmers who are switching back to Classic ASP right now.

"Classic ASP is simple to use, widely supported, it's Windows-based, and it provides users with great dynamically-generated pages. What more could users want?"

About DMXReady
DMXReady provides open source ASP-based web applications like CMS, membership management, ecommerce, content publishing, and online contest software for web professionals and website owners. Its products can be used "right out of the box" on Windows or hybrid cloud servers, and can be customized right down to the code and database level, providing both ease of use and flexibility for its customers.