More than 200 dogs that have lived their lives confined in cages have a new lease on life today after a weekend journey from puppy mills in Missouri thanks to a joint rescue effort by National Mill Dog Rescue of Colorado Springs, Colo. and Best Friends Animal Society of Kanab, Utah. As part of Best Friends' "Pup My Ride" program, the dogs were transported to safety at North Shore Animal League America in Port Washington, N.Y. 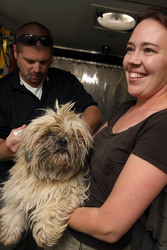 Two hundred cast-off puppy mill dogs from Missouri are safe today after being delivered to local rescue groups in the New York area. Best Friends Animal Society, in collaboration with National Mill Dog Rescue, arranged for the release and transport of the dogs and after a long, but hopeful cross-country journey over the Mother's Day weekend, they were delivered this morning to waiting groups here at North Shore Animal League America.

Among the rescued dogs are adults that were used for breeding, adolescents and puppies, including various breeds such as cocker spaniels, chihuahuas, mini pinchers, Jack Russell terriers and poodle mixes. Dogs like these, considered used up or unsalable by large commercial breeders, are typically killed or sold at mill dog auctions for as little as 25 cents. Instead, these dogs will get a new chance for happy lives and made available for adoption from local area rescue groups.

Joanne Yohannan, senior vice president of operations for the Animal League, said that the rescued animals remaining at the facility would be given time to settle in, and be fed and hydrated after their long journey.

"We first must get the dogs feeling safe and comfortable in their new environment," Ms. Yohannan said. "Then our staff experts will begin the process of evaluating each animal. This includes medical examinations, behavioral evaluation to determine their emotional and psychological status and grooming, which will help make them feel and look better. These dogs will experience the nurturing and the warmth of human contact they have been deprived of all their lives to prepare them for adoption into the loving homes they deserve."

"Rather than being needlessly killed because they were no longer wanted by their breeders, some beautiful dogs are about to begin a new and exciting phase of their lives," said Kelli Ohrtman, campaign specialist for Best Friends Animal Society, which funded the rescue of the dogs to the New York area through its "Pup My Ride" transportation program.

Teresa Strader, director of National Mill Dog Rescue, based in Colorado Springs, Colo., said the collaborative nature of the rescue is a direct indication of the growing network of rescue organizations across the country with an interest in putting an end to current commercial dog breeding practices.

"This effort will make a life-changing difference for some 200 dogs and the people lucky enough to adopt them," Strader said. "But it is estimated that there more than one million dogs held captive in puppy mills today and we ask people to never forget the victims left behind."

The rescue and transport of the dogs is part of Best Friends Animal Society's "Puppies Aren't Products" national campaign (puppiesarentproducts.com), which targets the retail end of the puppy mill industry through informational demonstrations at puppy emporiums. Launched in Los Angeles last year, the peaceful pet store demonstrations have succeeded in convincing stores to adopt a humane business model that relies on the sale of pets from rescue groups and shelters rather than dogs from puppy mills. The campaign is being expanded nationally to help unsuspecting consumers become aware of the cruelty behind many dogs offered for retail sale.

"Puppy mill dogs comprise a significant percentage of the 4-5 million pets that die in American shelters annually", said Ohrtman. "The mission of Best Friends Animal Society is to bring about a time when there are no more homeless pets. It's what the public wants and the pet trade industry must change dramatically or it will become a relic of the past."

"Once our staff experts have determined that the dogs are ready for adoptions we will be eager to find the perfect homes for each and every one of these wonderful dogs," said Ms. Yohannan.

Rumpled but safe: One of the more than 200 dogs delivered to safety today in Port Washington, N.Y.

After a long, 1,200-mile journey from Missouri, rescued dogs receive love and attention prior to being made available for adoption.