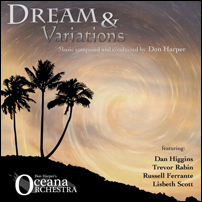 At once sweeping and intimate, Dream and Variations is an eclectic collection of musical vignettes performed by Don Harper's Oceana Orchestra, a hand-picked 70-piece ensemble and 32-voice choir.

After years as a sought-after behind the scenes Hollywood composer, orchestrator, and conductor, Don Harper has claimed his own musical voice with his first CD release, a collection entitled Dream and Variations, available March 1st on the independent Luminaria Records.

"At once sweeping and intimate, Dream and Variations is an eclectic collection of musical vignettes performed by Don Harper's Oceana Orchestra, a hand-picked 70-piece ensemble and 32-voice choir." It was recorded at Warner Bros. Studios' Eastwood Stage, and is a unique blending of instruments, vocalists and musical styles, all within a symphonic framework.

Moved by the devastation of Hurricane Katrina, he and lyricist Tom Child were moved to write the haunting and soulful End of Days (sung by Lisbeth Scott), as a lament and prayer to the city of New Orleans. This set off a flurry of writing and from that initial inspiration arose what would become Dream and Variations, nine pieces that complete an American musical mosaic.

Session great Dan Higgins performs the impressionistic soprano saxophone on the title track. Trevor Rabin (film composer and former member of Yes) wields a guitar that soars over the top of Where Do We Go From Here? Jazz pianist Russell Ferante of The Yellowjackets is featured throughout, along with notable string players Dave Stone (upright bass), Sid Page (violin), and Steve Erdody (cello).

While the seed of Dream and Variations was planted in tragedy, the work itself is uplifting, confident and hopeful, owing in large part to its hybrid of jazz, Americana, rock, spirituals, blues, and even a touch of ethnic flute and bluegrass performed by a world-class ensemble. 'It's a symphony orchestra with an identity crisis…' Harper admits, …just like America'.

Don Harper has composed and conducted music for dozens of feature films and television series, as well as live events worldwide. To hear more visit Donharper.com.

Dream and Variations is now available on iTunes, CDbaby and other digital download retailers.