Dr. Raymond Mobrez Files Declaration Alleging Gripe Site Suit was filed for "harassment purposes to send a message to their victims and their potential Attorneys"

The latest case in a pandemic of Internet defamation lawsuits has taken an interesting turn. A defamation victim sued Internet gripe site, Gripe site then sued victim's attorney, victim then becomes witness for his own attorney. 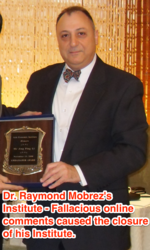 Dr. Mobrez's Institute could have been a bridge between the USA and Asia economic ties, in particular, relations with USA-China. Unfortunately these negative comments caused the close.

Dr. Mobrez's Institute could have been a bridge between the USA and Asia economic ties, in particular, relations with USA-China. Unfortunately these negative comments caused the closure of the Institute.

Raymond Mobrez of Asia Economic Institute (AEI), a plaintiff in an internet defamation lawsuit has filed a declaration of support for his attorney Lisa Borodkin, who was turn was sued by the defamation defendant alleging that she filed a frivolous law suit {In The United States District Court For The District Of Arizona No. CV-11-01426-PHX-GMS}.

According to court documents, Raymond Mobrez's rebuttal to the Gripe Site's allegations of frivolity alleges that "It [the gripe site] is a non-governmental, non-regulatory, self appointed authority that invites individuals to make anonymous, unwarranted proclamations providing a free platform to slander and defame anyone at will, without investigation, corroboration, justification,or a modicum of regulatory authority or standards of any kind."

Dr. Mobrez went on to declare that he had suffered catastrophic damages by the same gripe site and according to court documents attached numerous testimonies from third parties attesting to the damages he suffered. One affiant was Charlie Yan, who is the director and vice president of the California international education and special adviser to the department of commerce in Shaanix China. Mr. Yan testified under the penalty of perjury "I have known Dr. Raymond Mobrez for over 17 years. Last year, we had numerous business opportunities in the educational sector. We planned to offer conferences and seminars… I knew of numerous groups and entities that were interested in attending these conferences. However, they no longer expressed interest after they became aware of the derogatory statements posted on Dr. Mobrez's Institute could have been a bridge between the USA and Asia economic ties, in particular, relations with USA-China. Unfortunately these negative comments caused the closure of the Institute."

ABOUT MICHAEL ROBERTS OF REXXFIELD.COM
Michael Roberts is a licensed private investigator and thought leader in the areas of Internet anonymity, abuse of electronic free speech and industry regulation to protect victims of cyber bullies and defamation. He is an Internet industry watchdog committed to bringing important legal developments to the public's attention. He works with victims who have had fallacious complaints filed online by competitors engaging in tortious interference. He recently launched a Internet Defamation victims support and action group.

Believed to be the world's first professional Internet bounty hunter, Michael Roberts had better reason than most to dedicate his professional life to catching cyber predators – he was once a victim, and continues to be harassed as he works tirelessly to expose the appalling business practices of unscrupulous website operators. Michael's personal story was aired recently in a 60-Minutes segment and can be viewed at http://www.FathersFight.org

Michael published a video case study and demonstration of the dynamics between Search Engines & Gripe Sites and how the businesses share revenue from ads displayed on anonymously posted complaints. This video has been viewed by thousands according to YouTube statistics.