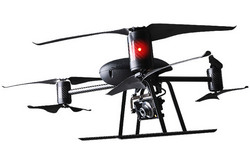 Remotely controlled aircraft are available for many purposes, and most fall into a class somewhere between toys and the high quality models piloted by hobbyists. Beyond this class is a large gap approaching the point where full size aircraft must be used to achieve tasks such as commercial photography and industrial inspection. In the past this gap was filled by model aircraft with additional equipment grafted on, which required skilled and trained pilots to operate. Draganfly Innovations has created a better alternative; a purpose built self-stabilizing multiple rotor helicopter specifically designed for filming high definition video and photographing high-resolution aerial pictures.

The Draganflyer X6 helicopter uses interchangeable cameras, covering different areas of use. A high definition video camera provides 1080p resolution. For dawn and dusk use, there is a low light (0.0001lux) video camera. For night use or search and rescue, the thermal FLIR (Forward Looking Infra-Red) camera provides heat vision. High-resolution photographs can be captured with the 10.1 mega-pixel digital still camera. When using any of the camera modules, a viewfinder video signal is streamed wirelessly back to the operator for real-time viewing on video glasses. The camera mount tilts by remote control, and the helicopter can pan side to side or in a circle.

Durability and safety have been incorporated into the design of the Draganflyer X6 helicopter. With dual motors on each of the three arms, even if an in-flight collision causes one of the motors or rotors to stop working, the Draganflyer X6 helicopter will still be able to keep flying using the remaining five motors. This ability to fly with a missing motor or rotor is not found in any other comparable helicopter. Other safety features include bright LED navigation lights for safe flying at a distance or in darkness, and automatic self-landing if the radio link controlling the helicopter is lost. An on-board flight recorder (black box) stores telemetry and flight data in a removable memory card, and can be used for post flight analysis.