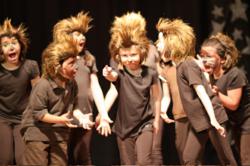 "We Are Monsters", a new children's musical from Beat by Beat Press.

Kids should have a chance to act in new shows written specifically and especially for them.

Beat by Beat Press, an online children’s musical theatre publisher launches http://www.bbbpress.com, bringing directors and teachers new high-quality musicals created by a team of talented writers and educators from New York City. Schools and community theaters no longer need to produce the same old shows through the same old publishers only to have their audience lose count of the number of times they’ve seen them.

Beat by Beat Press was founded by New York composer, writer and educator Denver Casado.  Casado, along with a team of collaborators with deep roots in New York City’s arts education community, has spent nearly a decade working with children creating contemporary musicals that kids can relate to and enjoy performing.  Now, with Beat by Beat Press, schools and youth theaters across the country have access to these original, crowd pleasing children’s musicals through an easy to use online publishing platform that directors and teachers will find refreshing.

“We kept hearing parents, teachers and directors tell us they would love the opportunity to produce our original shows,” said Casado. “Other children’s musicals out there are mostly adaptations from movies or from traditional adult musicals.  We believe kids should have a chance to act in new shows written specifically and especially for them.”

Beat by Beat Press has already attracted national attention. Theaters and schools from New York to California are licensing shows for next season. Beat by Beat Press’ hit show, Musicville, will be featured in this summer’s Children’s Musical Theatre Festival in New York City, presented by The Broadway Workshop. Musicville was one of two shows selected from over 100 submissions.

“Musical theatre had such a positive impact on me as a kid,” Casado says. “It’s rewarding to help provide that experience for other young performers.”

For more information visit http://www.bbbpress.com or become a fan on Facebook.

About Beat by Beat Press

Beat by Beat Press, an online children’s musical theater publisher, provides fresh and original shows for primary and middle school age performers. The musical plays were created by a team of talented writers and educators in New York City. These children’s shows are packaged into online production kits for teachers and directors to easily produce. Beat by Beat is headquartered in New York, NY.