Oral healthcare experts from Eludril and Elgydium have published guidelines to help Easter egg fans enjoy their seasonal chocolate treats in a healthier manner. Chocolate consumption in the UK has risen by five per cent annually in recent years, a trend which market intelligence experts Mintel expect to continue up to 2016. 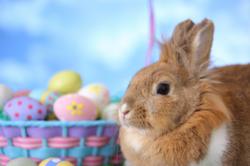 Few people stop and think about how too much sugar can lead to gum disease and all the potentially serious conditions associated with it.

Chocolate consumption in the UK has risen by five per cent annually in recent years, a trend which market intelligence experts Mintel expect to continue up to 2016.

That does not bode well for teeth and gums, warn the manufacturers of Elgydium toothpaste and Eludril mouthwash.

This increases the likelihood of gum disease, which has been linked with more serious conditions such as heart disease, diabetes, respiratory disease, osteoporosis and some cancers.

Elgydium and Eludril’s experts recommend ‘keeping Easter special’ by not eating any eggs before Easter Sunday – a healthy and respectful alternative to the approach taken by many UK supermarkets, some of which started selling chocolate eggs as early as Christmas Eve.

A spokesperson for Elgydium and Eludril said: “It’s no secret that eating too much sugar-laden chocolate at Easter – or any other time – will have a negative impact on your teeth and your waistline.

“But few people stop and think about how too much sugar can lead to gingivitis (gum disease) and all the potentially serious conditions that have been associated with it.”

Gingivitis can be easily identified and treated. Early signs of gum disease include sore red gums.

Another symptom is swollen gums – inflammation or reddening, particularly in the triangular areas between the teeth.

Bleeding gums are an indication that gingivitis has been present for some time and left untreated. It can also be a sign of brushing too hard.

The consequences of ignoring gingivitis include a receding gum, although this can also be caused by over-hard brushing.

Chlorhexidine is an ingredient in Elgydium toothpaste, which can be used daily, and also Eludril gingivitis mouthwash.

For more information about Elgydium and Eludril, please contact Nikki Warner-Green at Ceuta Healthcare on +44 (0)844 243 6661.

Eludril Mouthwash is an antibacterial and analgesic solution which can be used to manage a number of oral health problems.

Its main use is to treat and prevent dental plaque formation and gum disease (gingivitis, also known as periodontitis) by preventing the build-up of bacteria.

Eludril Mouthwash can also be used to maintain oral hygiene in situations where tooth brushing is difficult, for instance, following oral surgery or in physically or mentally handicapped patients.

Eludril can also be used as a disinfectant for the cleansing of removable dentures and in the management of common mouth ulcers and oral candidiasis infections (fungus infections).

Elgydium Whitening, Sensitive and Decay Protection are also available as part of the Elgydium range of toothpastes.