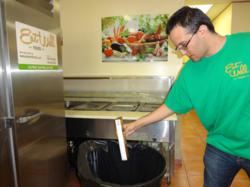 In accordance with their new wheat-free policy, Justin Lew of Eat Well Foods throws a box of wheat pasta into the trash can.

We offer our customers the ability to easily substitute one meal choice for another, and so they can avoid gluten completely if they so desire.

In his groundbreaking book, Wheat Belly, Dr. William Davis exposes the addictive nature of wheat and its negative effects upon our health. Recognizing the wisdom of Dr. Davis’s revelations, Eat Well Foods has eliminated wheat products from its menu.

“With the elimination of wheat, we have had to modify a number of our recipes,” says Mark Lew, owner and chef at Eat Well Foods. “Lo and behold, the change from durum wheat flour to oat flour has surprisingly improved the flavor of the meals affected! I don’t think that I’ve tasted a better meatloaf than the one we’ve just created, and the breakfasts from our diet plans that we’ve been forced to modify are also better now. The oats have added another layer of flavor that was missing before.”

Since Eat Well Foods makes all sauces, marinades, and gravies from scratch to ensure the freshest taste available, this is no small praise coming from the chef. “As for the meals that have relied on pasta for their balance, we’re providing quinoa rotelle pasta in lieu of wheat noodles.”

Eat Well Foods is not totally gluten-free. "We want to be clear about that," Mark says. "We are still using barley in our mushroom barley soup and barley flour in our homemade tortillas for our wraps where the gluten is necessary because of its elasticity, but that’s it. Still, we offer our customers the ability to easily substitute one meal choice for another, and so they can avoid gluten completely if they so desire.”

Researchers like Dr. Davis and others have shown that wheat and gluten are a major cause of inflammation in human physiology, and inflammation is implicated in a great many health issues, including heart disease. As more evidence comes to light, it becomes clear that a gluten-free diet is no longer just for people with Celiac disease or other forms of gluten sensitivity; it’s necessary for advancement of optimal health.

A complete media kit can be obtained by contacting Mark (Mario) Lew at 786-991-6602 or Hank Eder at hank(at)hankeder(dot)com.