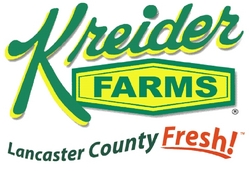 Kreider Farms' egg division, comprised of four million laying hens, is based out of four Pa. locations around the Lancaster region: Manheim, Middletown, Mount Pleasant and Mount Joy. This past summer, Kreider Farms opened its most advanced 'chicken houses of the future' in Mount Joy. These houses represent a milestone for Kreider Farms: 50 percent of the Farms' total egg production is housed in these new high-tech facilities.

"No other egg producer in the country has such a high percentage of their egg production coming from these state-of-the-art facilities," said Tom Beachler, Kreider Farms' vice president of operations. 'Most egg producers are still operating exclusively out of old-style facilities that are between 20 and 30 years old.' Three additional state-of-the-art chicken houses are planned at the Manheim location, with openings scheduled for 2009, 2010 and 2011. When completed, approximately 75% of all Kreider Farms egg production will come from the newest and most state-of-the-art egg processing facilities available anywhere in the United States.

'There is an ongoing national debate about egg-laying hens, and whether they should live in caged or cage-free environments,' said Ron Kreider, president and CEO, and the third-generation family leader of Kreider Farms. 'Instead of arguing about cages versus cage free egg production, the industry and consumers need to focus on a realistic compromise. Kreider Farms' new chicken house is our vision of what a 'next generation' egg production facility should consist of - a best practice that offers enhanced animal welfare as well as increased food safety.'

Some of the features of Kreider Farms' state-of-the-art chicken houses include:

Watch a video about Kreider Farms' egg division and processes, by clicking here.

'We cannot build these high-tech chicken houses fast enough,' said Dave Andrews, Kreider Farms' vice president of sales & marketing. 'Demand for Kreider's eggs has increased substantially since the first version of the Farms' modern chicken facility was introduced five years ago. We have a 100 percent commitment rate from new clients, who visit the farm. The high technology, cleanliness and obvious well-being of our hens, sets Kreider Farms apart from most other egg producers across the country.' All of Kreider Farms' egg facilities are located within close proximity of its distribution center, which enables the company to be efficient. The distribution center is geographically positioned to service customers from Virginia through New England. Kreider Farms distributes its eggs to retailers, as well as wholesale distributors; varieties sold include white, brown, organic, cage-free, free-range and omega.