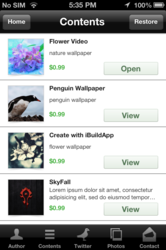 With our updated eCommerce widget, iBuildApp now has a powerful ready-to-market solution that caters to SMB and e-commerce stores.

Selling in-app purchases within a mobile app built using BuildApp just got a whole lot easier thanks to the launch of a new updated eCommerce widget. The tool allows iBuildApp developers to easily add ecommerce to mobile apps so people can click through and buy downloadable products directly from an app.

The eCommerce widget allows businesses to offer their customers a completely new shopping experience on mobile. The free and no coding required solution from iBuildApp sets a new standard for easy implementation of mobile shopping. The widget is integrated with iTunes in-app purchases iTunes or Paypal for Android. These payment integrations allow companies to set up their mobile store in minutes.

“Our new product will save business owners tens of thousands of dollars that would otherwise be used to develop storefronts specifically tailored to meet the requirements of their company. With our updated eCommerce widget, iBuildApp now has a powerful ready-to-market solution that caters to SMB and e-commerce stores,” said Rafael Soultanov, CEO of iBuildApp.

Android and iPhone apps are becoming increasingly popular for small businesses to sell their goods to millions of consumers who use smartphones. According to eMarketer data, US m-commerce revenue was up 81 per cent in 2012 and is projected to rise another almost 55% in 2013. By 2017, Forrester predicts the US mobile market payment market will hit $90billion. Other countries such as China are also on the rise.

iBuildApp customers can tap into this growing market now by selling products on mobile apps. With iBuildApp, mobile apps to be created and deployed to all major mobile operating systems with a few clicks, and will adhere to the strict apple iTunes review team standards required to be published on Apple App store.

The updated widget was a result of customer requests, including this question: How can I create in-app purchases with iBuildApp.com?

Using the iBuildApp platform, anyone can build, test, and publish a mobile app quickly and inexpensively, without knowing any code. And now, anyone can turn their app into a valuable marketing and branding tool, by letting customers buy directly within an app.

About iBuildApp http://www.iBuildApp.com
iBuildApp is a patent-pending automated mobile app creation and publishing Platform-as-a-Service. The platform allows any business, group or individual to create and publish a native or a web app for a smartphone or a tablet (currently supporting HTML, iOS and Android) in a matter of minutes. The interface is template-based with widgets to add location (maps), contact us, coupons, video, audio, pictures, RSS, Twitter, Facebook and more.

iBuidApp is a mobile DYI platform for iPhone, iPad, Android and HTML5 apps. Since launching in 2011, there have been over 15 million downloads by over 270,000 businesses (app builders). There are been over 320,000 apps built and over 60,000 apps published and monthly visitors exceed 2.5 million.

Build an Android App - iBuildApp is Free and Easy to Use