Bill Cima, author of "Less Government, More Future," maintains that over-sized government diminishes economic freedom, GDP rate of growth and opportunity, making financial goal attainment more difficult and corruption a more viable alternative. The most free nations in the world have the most vibrant economies and are the least corrupt. 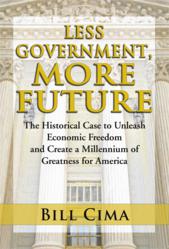 As government moves beyond its core functions, economic vitality and opportunity degrade, while corruption increases..

Corporate greed, corruption and control of financial markets by wealthy Wall Street corporations have come under fire by the Occupy Wall Street protesters for the past month, as they lash out against the evils of capitalism. Although some of their objectives may be laudable, Bill Cima feels the protesters have missed the “bigger picture,” which is that capitalism, in a free market environment, is the best system ever invented for creating wealth, lifting people out of poverty and limiting corruption. Why is this?

It is easily verifiable through several global studies performed annually on economic freedom and corruption, cited in Cima’s new book, "Less Government, More Future," that the freest nations have the most vibrant economies, the highest gross domestic product (GDP) growth rates and the most opportunity. Where there is more opportunity, there is less corruption and less ruthlessness, because goals can be achieved more often through legitimate economic enterprises without having to undertake the risk of illegal or morally despicable acts.

The first two studies involve assessments of economic freedom. The Heritage Foundation and the Wall Street Journal evaluate 183 countries annually against their “Index of Economic Freedom.” The Fraser Institute, through its “Freedom of the World Index,” performs a similar evaluation, arriving at comparable rankings and conclusions.

Hence, Cima notes that these studies on economic freedom clearly show that as government expands beyond its core functions, by its very nature it diminishes economic freedom and degrades the robustness of the economy, adversely impacting the most coveted aspects of civilization and life.

When Bill Cima compared the “Index of Economic Freedom” rankings with those of the “Corruption Index” rankings in "Less Government, More Future," he found the result to be quite informative. Taken quartile by quartile, there is better than an 80% correlation between the ranking of nations according to the “Index of Economic Freedom” and the ranking by the “Corruption Index.” That is, the higher the level of economic freedom, the less corruption. In fact, corruption scored 3 times better in the top quartile of economically free nations versus those in the bottom quartile.

The top 10 most economically free nations in the world, according to the Heritage Foundation/Wall Street Journal “Index of Economic Freedom” (Fraser Institute “Freedom of the World Index” similar) in order of their ranking are Hong Kong, Singapore, Australia, New Zealand, Switzerland, Canada, Ireland, Denmark, United States, and Chile. Six of these 10 nations are among the top 10 least corrupt nations in the world, according to Transparency International, with the remainder within the top 22. The United States is 22, well within the top 13 per cent of least corrupt nations.

Cima's conclusion: capitalism within a free market system creates the highest level of economic vitality and the lowest level of corruption, with both of these parameters degrading as government size and power expands. The positive impact that economic vitality exerts on reducing corruption is analogous to the effect of lowering taxes on compliance, evidenced in "Less Government, More Future.". As taxes decrease, people put less effort into devising schemes to avoid paying tax, as it becomes not worth the effort or risk. Raising taxes has the opposite effect, as compliance decreases with the heightened “payoff” of tax avoidance. Similarly, as opportunity increases, so does the ease of attaining goals, making corruption not worth the risk.

Although greed carries a mostly negative connotation, Cima points out that greed is good when it drives individuals and companies to higher levels of achievement, while working within the law and respecting the rights of others. Greed is a motivator, a contributor to positive attitude, determination and perseverance, which can be instrumental to elevating economic vitality and creating opportunity, thereby benefiting society overall.

Bill Cima argues that the virtue of capitalism is that greed is channeled into good for society far more than in any other system, largely because free capitalism produces the world’s most vibrant economies and the highest levels of opportunity. The Occupy Wall Street protesters are correct in their quest to reduce the negative consequences of greed, but their ire should be redirected toward government.

Reducing the size and power of government and expanding economic freedom, as Cima advocates in "Less Government, More Future," is not only essential to controlling corruption, but also to creating the economic vitality that will usher in a millennium of greatness for America.

Less Government, More Future can be purchased in either hard cover or e-version at: