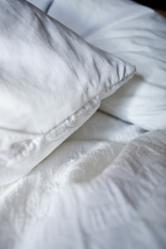 "Early to Bed, Early to rise" could be the key to better sleep and happiness.

Work or school obligations often force evening people to wake up hours earlier than they would naturally prefer. As a result, they get reduced, poorer quality sleep during the work week

A new University of Toronto study found that morning people are generally healthier and happier than night owls. Often, early risers feel more awake, alert, happier and more motivated than those who would rather sleep in later. Research has shown that those who prefer the morning may be healthier than night owls because they get better quality sleep.

The study, published in the May edition of the journal Emotion, involved two groups of adults between the ages of 17 to 38 and 59 to 79. Both groups were asked to fill out questionnaires regarding their sleeping routines, emotional state, overall health and preferred time of day.

“We collected younger and older adults’ responses as they came in to our lab to participate in various aging and cognition research studies over a two year period,” said lead researcher Renee Biss, a PhD student with the Department of Psychology and the Rotman Research Institute.

Only seven percent of young people identify as morning people, yet the night owl habits of young people generally fade in adulthood. By age 60, most people prefer to go to bed earlier and wake up earlier, with 93 percent of the older group reporting that they were early risers.

“Research on aging and sleep suggests that earlier wake times in older adulthood are tied to age-related changes in the amount and timing of different hormones in the brain,” Biss explained. “Thus, our research suggests that these changes in sleeping and waking habits may actually be associated with positive emotional consequences for older adults.”

Those who prefer the evening are more prone to “social jet lag,” where a person’s biological clock is out of sync with their social lives. This leads to daytime sleepiness and a struggle to get up in the morning.

“Work or school obligations often force evening people to wake up hours earlier than they would naturally prefer. As a result, they get reduced, poorer quality sleep during the work week,” said Biss. “This could leave them less cheerful and energetic relative to morning people who are free to wake up at their naturally preferred time every day.”

“By having a regular sleep schedule every day, a person can wake up feeling more refreshed than if they make up for lost sleep on the weekends,” said Dr. Naim, who was not involved in the study. “Practicing good habits like getting enough exercise, limiting caffeine and sticking to a sleep schedule can help night owls learn to cope with our nine-to-five society.”