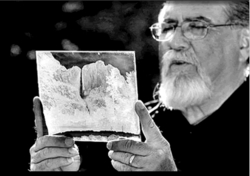 Rick Norsigian examines one of the glass negatives authenticated as Ansel Adams' creation.

In almost all of the photographs, the compositions are virtually flawless, truly being made by a photographer of singular vision and talent.

A team of art and forensic experts have concluded an exhaustive examination of 65 glass negatives purchased at a Fresno garage sale for a mere $45. The experts, working together for almost one year, have emphatically determined that the negatives were in fact created by the iconic photographer Ansel Adams. The images themselves are stunning and, Patrick Alt, who has 40 years of experience working with the same types of cameras Ansel Adams used described them as follows: "In almost all of the photographs, the compositions are virtually flawless, truly being made by a photographer of singular vision and talent."

In 1937, a fire ripped through Ansel Adams' darkroom, destroying as many as 5,000 negatives. This loss represented one-third of his portfolio. Many of the negatives had never been developed into photographs. It was a heartbreaking loss for Adams' and his wife, Virginia, and it has long been lamented by art lovers who wanted to trace how Adams found his ultimate artistic voice in the initial phase of his career. Historians assumed that the images and evidence of his early career were simply lost forever.

This critical void in Adams' collection continued until Spring of 2000. Rick Norsigian, a painter for the Fresno school district, chanced upon two boxes of antique glass negatives at a garage sale in Fresno, California. He bargained the seller down from $70 and purchased the negatives.

The evidence that these negatives were created by Adams is overwhelming:

The final report for the investigation will be released at a press conference on Tuesday, July 27 at 10:30 a.m. at the David Streets Gallery, 9407 South Santa Monica Boulevard, Beverly Hills Journalists and media representatives may register for the press conference at http://www.lostnegatives.com.

Rick Norsigian observed, "You look at these photographs and they take your breath away. But it is even more meaningful and rewarding to finally have the leading experts confirm what I believed in my heart when I saw the images for the first time. I am grateful to these highly skilled professionals who have given so generously of their time and expertise to make Ansel Adams' work come alive in never before seen images. Now, his fans worldwide and an entirely new generation can explore and fall in love with his work."

Arnold Peter, partner at boutique entertainment law firm Peter Rubin & Simon, assembled the authentication team and spoke about the unique challenges inherent in verifying photographs. "There is no definitive authority charged with authenticating photographs and unlike a painting there is no signature linking the work to the artist. So, we decided to apply the highest possible evidentiary standard we could think of. Every individual who has actually examined all the evidence we have gathered has come to the same conclusion--these are in fact the works of Ansel Adams."

With reputations as industry insiders, the members of Peter Rubin & Simon have expertise in all facets of film and television, artist representation, finance, new media, litigation and other legal and entertainment fields. The firm has a distinctive and diverse roster of clients. Its institutional clients include BBC Worldwide, Netflix, National Association of Television Program Executives, Participant Media and the University of Southern California. Launched by the founding partners of the law firm who wanted to address a growing client need, PRS Media Partners, LLC represents an innovative model that goes above and beyond the traditional legal representation model, offering an extension of services that include business development and analysis; strategies for content development and production; distribution and marketing; brand building; and financing. One of the founding partners of the law firm and Managing Director of PRS Media Partners, Arnold Peter has a unique combination of entertainment industry experience as a former Universal Studios executive and an extensive background in criminal forensics and crime scene investigations.

Image From One Of The Norsigian Negatives