Includes two-day outdoor party and a chance to win a trip to Ireland. 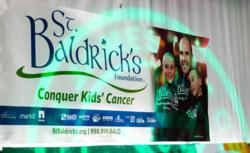 For the 15th year Fadó Irish Pub, located in downtown Denver at 1735 19th St., will host the largest outdoor St. Patrick's Day festival in Denver. Events are scheduled from Friday, March 15, through Sunday, March 17, for what they are calling The Lost Weekend 2013.

The event is fully weatherproofed with massive outdoor tents and heaters should the weather decide to not celebrate with us. Pre-sale tickets available on-line now.

Win a Trip for Two to Ireland

Fadó wants to send a lucky winner on a never-to-forgot trip to Ireland. It's a four-day and three-night trip to Dublin, Ireland including airfare, hotel and a VIP tour of the Guinness Brewery at St. James Gate. To enter, simply sign up for the Fadó newsletter.

Be a hero for kids with cancer. St. Baldrick's Foundation is the world's largest volunteer-driven fundraising event for childhood cancer research. Thousands of volunteers shave their heads in solidarity of children with cancer while requesting donations of support from friends and family. The goal this year is $240,000 and Fadó Irish Pub will donate 20 percent of all food sales during the event. Nearly 400 people will have their heads shaved at the event at Fadó this year.

Fadó Irish Pub is at the heart of the 51st Annual Denver St. Patrick's Day Parade route and doors open at 8 a.m. Start with a pint of the good stuff, a traditional Irish breakfast and a side of sports. Limited brunch menu until 11:30 a.m.

The doors to the parade day outdoor party open at 10 a.m. with a $15 cover charge. Family fun will be had until 4 p.m. with children’s games and face painting.

At 10 a.m. rock out to the sounds of over 10 hours of local Irish music and entertainment featuring Brian & Brendan Clancy followed by Big Paddy, The Indulger’s, Celtic Steps (Traditional Irish Dancers), That 80s Band and Under a Blood Red Sky.

Featured on the big screen will be 6 Nations Rugby with Italy vs. Ireland at 8:30 a.m., Wales vs. England at 11 a.m. and France vs. Scotland at 2 p.m. See the Fado soccer pub schedule for a full televised sports schedule.

Doors open to Denver’s biggest St. Patrick’s Day party at 8 a.m. The Lost Weekend outdoor party starts at 11 a.m. with live music from the Clancy's, Big Paddy, The Indulgers, Celtic Steps, and Under a Blood Red Sky. There will be a wide selection of beer, cocktail and food options at the outdoor

One and two day passes can be purchased at the Denver St. Patrick's Day page.

About Fadó Irish Pub and Restaurant
Fadó is an authentic Irish pub that was originally designed and built in Ireland and shipped to Denver. Fadó serves more Guinness than any other Irish pub in Denver, all of which is to the highest standards and comes straight from St. James Gate, Dublin, Ireland.

Fadó (pronounced fuh-doe) Irish Pub and Restaurant opened in Denver in 1998 and is distinguished by its genuine Irish hospitality, quality and craic (pronounced ‘crack’, a uniquely Irish form of fun).
http://www.facebook.com/FadoDenver
http://www.twitter.com/FadoDenver
Fadó is using the hashtag #StPatricksDay2013 on Twitter.