Case IH is celebrating the 85-year anniversary of the introduction of Farmall tractors. Adhering to the Farmall multi-purpose workhorse heritage, the full Case IH Farmall lineup currently features 20 models. Available in a wide variety of configurations with engines ranging from 31 to 105 engine horsepower, the tractors maintain the Farmall legacy of value, versatility and performance. 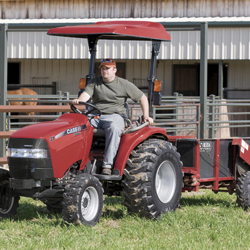 In honor of Farmall's 85-year anniversary, Case IH is expanding the Farmall tractor lineup. Featuring 20 models, with engines ranging from 31 to 105 engine horsepower and available in a wide variety of configurations, the tractors maintain Farmall's legacy of value, versatility and performance.

America's favorite tractor is celebrating 85 years of providing rugged performance and value to farmers. "The first Farmall tractors were introduced in 1923, and they quickly put a lot of horses out of work," says Shawn Boone, manager of livestock marketing for Case IH.

Although they were called Farmall Regular tractors, they had a revolutionary narrow design and higher ground clearance, which allowed farmers to put it to work in taller row-crops without pushing down plants.

"In addition, the original Farmall Regular design allowed implements to be mounted fore and aft, further expanding its versatility," Boone adds. "These innovative features, combined with a broad dealer network, enabled the Farmall Regular to quickly become the tractor of choice for progressive farmers throughout North America."

The full Case IH Farmall lineup includes 20 models, with configurations ranging from compact straddle mount models to platform models with cab or ROPS options. "Whether you're in the market for a simple, reliable compact tractor or a high-end, high-horsepower model with all the bells and whistles, there's a Farmall for you," Boone says. "It's one of the most famous names in the history of tractors and Case IH is committed to upholding Farmall's reputation for power, versatility and ingenious engineering."

In 2008, five Class 2 and Class 3 Farmall compact models are available with PTO horsepower ranging from 25 to 43:

There also are two Class 4 Farmall models with PTO hp ratings of 47 and 51 respectively:

"From homeowners with large lawns to livestock operations to all-around farm use, from grading to hay production to material handling, we have a Case IH Farmall available, ready to tackle any job," says Boone. "That's what originally made them famous, and why Farmalls remain popular today."

An abridged history of Farmall
After their successful roll-out in the 1920s, the first Farmall Regular tractors were replaced in 1932 by F Series Farmalls, with their powerful four-cylinder engines. The famous "Harvester Red #50" paint was introduced in 1936 to make the tractors more visible to motorists on country rounds.

In 1939, the F Series Farmalls were replaced with different letter series - including A's, B's, H's and M's - along with "modern" styling. More than 390,000 Farmall H tractors were produced, ranking it as the top-selling Farmall of all time.

Then in 2003, Case IH reintroduced the legendary Farmall name on a line of compact Case IH tractors worthy of their namesake. The compact tractors were chosen to carry the Farmall name because of their strong, simple design and ability to handle all tasks on small farms and fill key roles on larger farms.

"Today, 85 years later, Farmall tractors still represent rock-solid value, versatility and performance," Boone says. "And as their name implies, Farmalls are still sized to do it 'all' around the home, farm or livestock operation reliably, comfortably and economically."

Case IH is a global leader in agricultural equipment, committed to collaborating with its customers to develop the most powerful, productive, reliable equipment - for those who demand more. With headquarters in the United States, Case IH has a network of dealers and distributors that operates in over 160 countries. Case IH provides agricultural equipment systems, flexible financial service offerings and parts and service support for professional farmers and commercial operators through a dedicated network of professional dealers and distributors. Productivity enhancing products include tractors; combines and harvesters; hay and forage equipment; tillage tools; planting and seeding systems; sprayers and applicators; and site-specific farming tools. Case IH is a brand of CNH (NYSE: CNH), a majority-owned subsidiary of Fiat Group (FIA: MI).

For more information, call 1-877-4CASEIH or visit us on the World Wide Web at http://www.caseih.com/na.