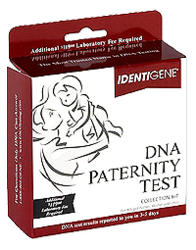 Identigene Gives Donation of Kits and Coupons to Fatherhood Matters

Confirmation of paternity can be a motivator, removing doubts about paternity can empower a father to become involved in parenting.

“We are honored to work with Martin Henderson and Fatherhood Matters,” said Steve Smith, Executive Director of Identigene. “Confirmation of paternity can be a motivator, removing doubts about paternity can empower a father to become involved in parenting,” added Smith. Martin Henderson, President of Fatherhood Matters, says it is important to remove any roadblock that deters men from being active in the lives of their children. “I’ve seen many examples where proving paternity has made all the difference. If a man knows a child is his, he’s more likely to provide financial and emotional support and to become invested in that child’s future,” says Henderson.

Identigene’s DNA paternity test kit is the only DNA paternity test kit available at major retail drugstores and supercenters nationwide. The kit is priced at $29.99 SRP, plus an additional laboratory processing fee. The turnaround time for Identigene’s test is just two business days. “Fatherhood Matters is in the community everyday speaking to families about the importance of fatherhood. If our partnership with Fatherhood Matters helps bring just one family together, it will have been worthwhile,” comments Smith.

The partnership with Fatherhood Matters is not the first non-profit that Identigene has supported over the last year. In July of 2012, Identigene partnered with St. Louis based Family Resource Center with its “Kids Deserve to be Liked” Facebook campaign, helping to fund programs to prevent and treat child abuse and neglect.

Visit http://www.DNAtesting.com for industry-leading resources including how-to videos, a store locator, product reviews and a blog dedicated to current issues in DNA and paternity testing. Connect with Identigene on Facebook at http://www.facebook.com/identigene or follow the company on Twitter at @Identigene.