In the tenth installment of his USSG awareness campaign, Federal appeals lawyer Stephen N. Preziosi looks at Buford v. United States 121 S.Ct 1276. 2169. The case confirmed that the Court of Appeals should defer to the District Court in matters related to evaluating a defendant’s consolidated criminal history for the purposes of invoking a Guidelines sentencing. 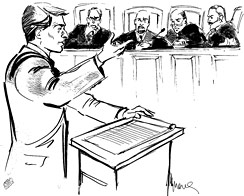 The US Supreme Court sent a clear message in Buford v. United States that, compared to the Court of Appeals, the District Court is more competent with respect to trial and sentencing practices since it deals with them on a daily basis.

In his ongoing look at cases that have contributed to current United States Sentencing Guidelines (USSG), Federal appeals lawyer Stephen N. Preziosi is focusing on Buford v. United States 121 S.Ct 1276, in which the US Supreme court held that the Court of Appeals should defer to the District Court in matters related to evaluating a defendant’s consolidated criminal history for the purposes of invoking a Guidelines sentencing.

In Buford v. United States, the defendant and petitioner Paula Buford pled guilty to armed bank robbery. It was Buford’s sixth conviction. Four of her previous convictions were related to a series of gas station robberies, and were the subject of a single indictment. The other conviction was for possession of cocaine with intent to deliver; a charge that came as a result of search warrants executed on Buford’s house after her arrest for the aforementioned gas station robberies.

Under United States Sentencing Guidelines, the length of Buford’s sentence for the armed bank robbery conviction would be based on whether the District Court judge deemed her a “career offender” – a designation reserved for defendants with at least two prior felony convictions for drug-related or violent crimes. The same Guidelines allowed for the consolidation of multiple related convictions as a single conviction. They also allowed for multiple prior convictions to be “functionally consolidated” for sentencing purposes, even when the individual convictions were not formally connected.

Given the allowance for consolidated and functionally consolidated convictions, Buford argued that she did not qualify as a “career offender” for sentencing purposes. However, the District Court judge rejected that argument in light of the fact that Buford’s convictions for possession and robbery were handled at separate hearings, and with separate prosecutors – therefore making them distinct, and not subject to consolidation. As such, due to her two prior convictions, Buford was deemed a “career offender” and sentenced to prison for 188 months per the Guidelines.

Ultimately, the US Supreme Court held unanimously that a deferential view – and not a “de novo” one – was the correct one for the Court of Appeals to take. It stated that the District Court is in a better position than the Court of Appeals to determine whether a defendant’s previous convictions should, or should not, be consolidated for the purposes of applying the “career offender” designation, and therefore invoking a minimum Guidelines sentence.

“The US Supreme Court sent a clear message in Buford v. United States that, compared to the Court of Appeals, the District Court is more competent with respect to trial and sentencing practices since it deals with them on a daily basis,” commented Federal appeals lawyer Stephen N. Preziosi. “At the same time, the US Supreme court rejected the notion that a `de novo’ review by the Court of Appeal would lead to greater consistency and clarity in sentencing.”

Federal appeals lawyer Stephen N. Preziosi handles criminal appeals in all U.S. Circuit Courts of Appeals and in New York State Appellate Courts (including Appellate Divisions and the New York Court of Appeals). Whether a case is under the Penal Law in New York State Courts or under Federal Law in the U.S. District Courts, Mr. Preziosi has extensive experience with all types of appellate matters in both the New York State Courts and the Federal Circuit Courts of Appeal. Mr. Preziosi has pursued appellate cases in the Appellate Divisions, the Appellate Terms and the highest court in the State of New York, the New York Court of Appeals. He has also taken on cases in the various U.S. Circuit Courts of Appeals, and successfully identified legal issues, designed and written briefs and conducted oral argument. The firm’s practice is concentrated in the area of appeals in criminal matters in both State and Federal Courts, and Mr. Preziosi recently launched a United States Sentencing Guidelines (USSG) awareness campaign to help the general public learn more about this critically important and influential aspect of criminal law.