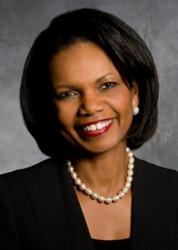 Condoleezza Rice will be on the FHU campus December 7, 2012

Rice served as the 66th secretary of state for the United States from 2005-2009. She was the second woman and the first African-American woman to hold the post. Prior to that appointment, she served as President George W. Bush’s national security advisor, the first woman to hold that position. She had also served on President George H.W. Bush’s National Security Council staff.

Currently, Rice is the Denning Professor in Global Business and the Economy at the Graduate School of Business; the Thomas and Barbara Stephenson Senior Fellow on Public Policy at the Hoover Institution; and a professor of Political Science at Stanford University. She is also a founding partner of Rice Hadley Gates, a business advisory firm that works with companies seeking to expand into emerging markets.

Rice also serves on the boards of a number of organizations ranging from an energy software company to the San Francisco Symphony. She has authored and co-authored a number of books including “Extraordinary, Ordinary People: A Memoir of Family” which became a bestseller in 2010. Her most recent book, “No Higher Honor: A Memoir of My Years in Washington,” was released last year.

Sponsorships for the Benefit Dinner beginning at $600 for the silver level are available from the FHU development office. General admission tickets are $150. All tickets include the dinner and the address by Rice. Sponsorships come with additional perks.

For additional information regarding sponsorships and tickets, call 731-989-6017 or 1-800-FHU-FHU1. Tickets may be purchased at fhu.edu/rice. All profits from the dinner are used to fund student scholarships at FHU.