From the streets of New York to the bright lights of Hollywood, there is an exciting new way for film, TV and music professionals to promote themselves, find work, hire crews, secure locations, rent equipment, and communicate with each other; from both a mobile and online prospective designed to work the way you do... 24/7 & On The Go! 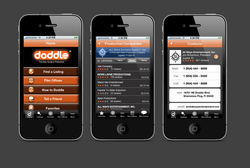 In an industry where time equals money, doddle saves on both. Lightning fast and user-friendly, doddle is a resource destined to be a producer’s best friend.

Initially designed for the iPhone, Mobile Imagination, LLC, is proud to present both the transformational smartphone application, doddle, and its online service available at http://www.doddleme.com.

doddle is transforming the lives of production professionals - from the film, television, and music industries - by giving them the unique ability to plan, communicate with, and manage their workforce from their smartphone throughout the creative process.

Just like their app, the new doddleOnline service also puts the world's entertainment production resources at your fingertips. Acting as a 24/7 production guide, doddleOnline allows access to a comprehensive directory, full of Vendors, Crew, Talent, Film Offices and much more. And the doddleOnline service expands upon the revolutionary iPhone app by giving users a larger screen and beautiful interface to use when they're in the office instead of in the field.

Moviemaker magazine recently listed doddle as one of the top 25 must have apps for filmmakers in their current summer issue. Basic listings on doddle are free, and premium listing opportunities are available for a nominal advertising fee. Once doddlePRO launches later this fall, it will include killer productivity tools such as digital interactive call sheets, internal note sharing, and other bells and whistles to present a truly transformational application to the world of production - the doddlePRO app will be available for a one time fee of only $9.99 at the iTunes store or for just $24.99 per year for the web version at: http://www.doddleme.com

Jim Robertson, Mobile Imagination, LLC Principal & Founder: "In an industry where time equals money, doddle saves on both. lightning fast and user-friendly, doddle is a resource destined to be a producer's best friend. Already a must-have smartphone application for the savvy entertainment professional, our new online service now opens the world of doddle to everyone on the internet. doddle was built by production people for production people in order to save producers money, time and get locals hired."

Richard Kwiat, Mobile Imagination, LLC Principal & Founder: "We created a beautiful app that brings simplicity to an often chaotic environment. doddle cuts through the noise, and gives entertainment professionals the ability to reach out and secure the exact services that they need at the exact moment that they need it… and did I mention, it's a really fun app to use."

ABOUT MOBILE IMAGINATION, LLC: Mobile Imagination's doddle places the world's production industry resources in the palm of your hand. Created by a team with decades of experience in the software and production industries, doddle promises to transform the lives of production professionals - from movies and television to audio, and video production - by giving them the unique ability to plan, communicate with, and manage their workforce from their smartphone throughout the creative process. This is the first of many mobile business productivity applications planned by Mobile Imagination, which will helps professionals across various industries spend less time in the office and more time in the field where their business is captured and created.

A sample of an online Listing