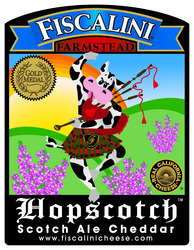 Immediately after the cheddar is milled, the curds are soaked in this wonderful brew for two hours, then placed in molds and pressed for 18 hours. After pressing, the 40 pound blocks are weighed, vacuum sealed and boxed for aging. The appearance is pleasing as the white cheddar’s pressed curds are saturated by dark ale. At 4 to 5 months the flavor of the cheddar and ale engage in a unique tasting experience, becoming more intense with age. Hopscotch is versatile—great for parties, snacking and cooking:

Visit http://www.fiscalinicheese.com for additional recipes, tasty ideas and to learn about Fiscalini’s other award-winning farmstead cheeses.