Irish Restaurant, The Chieftain, has just been recognized as a Top Class Pub in San Francisco, the place to spend St. Patrick’s Day and recently voted as serving the best corned beef and cabbage in the city. 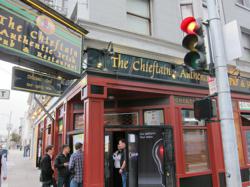 In a town known for bars and high-end bar tenders that concoct $20 drinks like a barrista, it is good to find an honest-to-goodness pub. Guinness well pulled, Harp as it should be delivered and true Irish whiskies (ok Scotch too).

If you like a fantastic Sports bar with the atmosphere and passion of the game can be felt, then come to The Chieftain to be part of the action. International games from around the world such as Soccer, Rugby and Gaelic games are experienced throughout the year. Domestically The Chieftain is a buzz with all the San Francisco Giants Baseball home and away games, College and NBA basketball, 49'ers Football, Sharks hockey, Earthquakes soccer to just name a few of what is viewed on The Chieftain's multiple large screen TV’s and surround sound systems.

Entertainment such as Live Irish Music and other local and traveling music acts can be enjoyed as part of the bustling entertainment schedule, to see an updated schedule visit The Chieftain or log onto http://www.thechieftain.com

The Chieftain was also featured on SF Travel's list of the top places to spend St. Patrick’s Day in the city.

Corned beef and cabbage is on The Chieftain’s menu year round, not just St. Patrick’s Day, so diners won’t miss out. Their full menu also features plenty of other authentic European delights like Shepherd’s Pie, Irish Stew, Bangers & Mash, Lamb Burger and of course the best Fish and Chips in San Francisco.

The Chieftain, a uniquely detailed authentic Irish pub, located at 198 5th Street(cross Howard), directly across the street from The InterContinental Hotel, one block from Moscone Convention Center, and a short walk from many of downtown San Francisco's most familiar hotels and attractions.