Montana Fly Fishing Heats Up in the late Winter

Trout rivers around Montana are slowly becoming more active as ice shelves recede and some early midge hatches are getting trout motivated to feed during mid day hours. 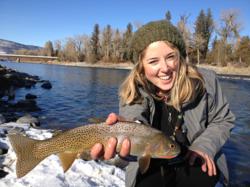 One of our guides just returned yesterday from a late morning outing on the Upper Madison and spent several hours casting to hundreds of rising trout without another angler in sight.

Guides at Montana Angler Fly Fishing have been reporting outstanding late winter conditions on rivers and spring creeks around Southwest Montana. Many smaller streams are closed in the winter months until the general opening day on May 18th but most larger rivers and several famous spring creeks remain open to fishing all year. Winter fly fishing in Montana is often surprisingly productive as the days become longer and temperatures slowly begin rising. Water levels are at their lowest point of the year in the winter months since most of the moisture is locked up in the frozen snow fields in the mountains.

“Late February and March is a great time to fish Montana” according to Montana Angler outfitter and guide Brian McGeehan. “Many of the local rivers start to open up and some of the big ice shelves recede to make wading much safer. We also start to see some strong midge hatches in the later winter. One of our guides just returned yesterday from a late morning outing on the Upper Madison and spent several hours casting to hundreds of rising trout without another angler in sight. Weather is always a wild card this time of year but we are getting a lot of nice mild days with temperatures in the 30s and 40s. These are ideal days to get out and make some casts in the middle of the day when trout are the most active. Our guides love the late winter because they have a lot of time to actually get out and do some of their own fishing before the busy spring and summer season hits when we have guests in every day. One of the great things about winter fishing is that the trout are very easy to find and their feeding habits are predictable. Since the water is still cold trout move into just a handful of slower and deeper runs where they are often highly concentrated. Their feeding schedule is also compact and most trout feed in the late morning and early afternoon in the rivers. Trout are mostly eating midges, stone flies and fish eggs so fly selection in the winter is relatively straightforward”

Several rivers around Southwest Montana are popular with local anglers for their winter fishing including the Gallatin and Madison. There are also several spring creeks near Livingston that produce consistent fishing on even the coldest days. Spring creeks are fed by underground springs and as a result have a higher water temperature than surrounding rivers. Most spring creeks in Montana require additional rod fees to the ranch owners in order to fish them. Montana Angler Fly Fishing (http://www.montanaangler.com) is based in Bozeman, Montana where they offer guided fishing packages on numerous streams and rivers in the region.