FM Pilots and its label, Interlantic Music Group, have partnered exclusively with noisetrade.com to release the group's sophomore EP, We Belong, for free download @ http://www.noisetrade.com/fmpilots. In addition, the group announces its latest round of regional tour dates. 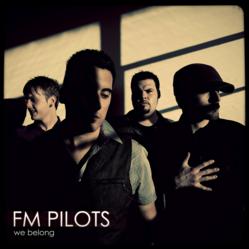 The five song EP, which was initially released on April 3, has already grown the group’s following and drawn the attention of both fans and the local media, garnering the group nominations for the local Urban Tulsa ABoT Music Awards.

September 18, 2012 – As summer winds down, Tulsa, OK based pop/rock act FM Pilots is excited to announce that the band and its label, Interlantic Music Group, have reached an agreement to release the group’s sophomore EP, We Belong, for free download in an exclusive agreement with the music distribution site noisetrade.com. The five song EP, which was initially released on April 3, has already grown the group’s following and drawn the attention of both fans and the local media, garnering the group nominations for the local Urban Tulsa ABoT (Absolute Best of Tulsa) Music Awards in Album of the Year, Band of the Year and Best Pop/Rock Artist categories in 2012.

After forming in early 2010 around the songwriting of lead vocalist and guitarist Nick Whitaker, FM Pilots took shape as Whitaker formed a partnership with bassist Blake Jarman, lead guitarist Josh Kephart and drummer Casey Meyering. The group’s initial single, “Chasing,” immediately drew attention and landed the group on the 2010 Homegroan Music Sampler, compiled by KMYZ (104.5FM) to showcase dozen of Tulsa’s best rising stars. The band’s self-titled, three song EP followed in the fall and laid the foundation for what was to come.

The 2012 release of We Belong shines a spotlight on the band’s chemistry and matured songwriting with a five song track list that offers songs for both the modern, alt-rock format in “No Time to Waste” and “Eyes Open” and pop radio with “Brighter” and “Counting Costs”. The title track, “We Belong”, however is perhaps the best indicator of where the group stands both lyrically and musically, as the band taps into its strengths and reveals the depth of Whitaker’s songwriting, drawing comparisons to Matt Nathanson and early John Mayer, amongst others. Overall, the EP provides an accurate picture of the group that Urban Tulsa Weekly called “One of the city’s most promising young pop/rock bands.”

Over the course of the past two years, FM Pilots has continued to build its fan base with consistent touring and showcasing at SXSW in 2011 and 2012, as well as landing slots performing at Tulsa Mayfest, Vans Warped Tour, Riverfest and sharing the stage with a handful of nationally touring artists. In addition, the band has also garnered significant local radio airplay in Tulsa on KMYZ (104.5FM), KMOD (97.5FM) and KHTT (106.9FM). As summer draws to a close, FM Pilots announces its latest round of tour dates, which includes:

These are initial dates in the band’s growing schedule as it continues to tour in support of We Belong and celebrates its release as a free download. We Belong can now be downloaded at: http://www.noisetrade.com/fmpilots

More information and music samples for FM Pilots can be found online at http://www.fmpilots.net and http://www.onesheet.com/fmpilots

Any additional requests for press materials or interviews can be directed through the band’s management, by contacting Matt Eidson at matteidson (at) hoffmansimpson (dot) com