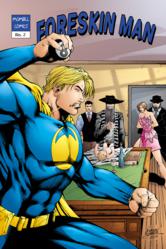 Brit milah is child abuse in a religious context

MGMbill.org released a new Foreskin Man comic book today that deals with the controversial practice of Jewish infant circumcision. The 12-page book introduces Miah Redstone, who belatedly makes plans to attend her nephew’s bris when she learns that his circumcision has been canceled. But will someone in the family have a change of heart? In the meantime, a rash of circumstraint thefts from California hospitals has the news media buzzing, and Miles Hastwick celebrates the opening of his new brit milah exhibit at the Museum of Genital Integrity.

The story in Foreskin Man #2 is written by Matthew Hess, with commissioned artwork by the same creative team that illustrated the first issue. Hess is president of San Diego based MGMbill.org, a group that has authored proposed federal, state, and local legislation to protect boys from medically unnecessary circumcision.

“Brit milah is child abuse in a religious context,” said Hess. “Why should an eight-day-old infant boy be forced to give up his foreskin for someone else’s spiritual beliefs? We need laws to protect male children from this painful and scarring blood ritual, and our second Foreskin Man comic book was created to get that point across.”

Although other religious groups also practice male genital cutting, in the United States ritual circumcision is most closely associated with Judaism. Earlier this year, Hess and sixteen fellow intactivists testified before the Massachusetts Joint Committee on the Judiciary in support of the MGM Bill (S. 1777), which would have prohibited forced circumcision of boys. Despite testimony from several Jewish speakers who condemned infant circumcision, the bill was voted down after fourteen different Jewish organizations in Massachusetts united to defeat it.

The Anti-Defamation League and three other Jewish groups are now mobilizing in opposition to the San Francisco MGM Bill Ballot Initiative, which is in the signature gathering phase. San Francisco resident Lloyd Schofield, the ballot measure’s proponent, says he is undeterred.

“Federal and state laws rightfully protect girls from even the mildest form of ritual genital cutting,” said Schofield. “Parents are free to alter their own genitals if they wish, but they should not be free to force this mutilation onto their children. It makes no difference whether the child is male or female.”

As with the first issue, Foreskin Man #2 is available to read and download for free at http://www.foreskinman.com. Printed copies may also be purchased online, or by ordering through a local comic book store.