From clipper ships to schooners to whalers, Hard Press Editions casts the spotlight on Frank Vining Smith (1879-1967), prolific maritime painter of the Golden Age of Sail. 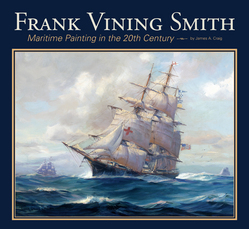 Hard Press Editions is pleased to announce the publication of Frank Vining Smith: Maritime Painting in the 20th Century, the most comprehensive survey of one of America's greatest marine artists.

Influenced by the New England shore of his youth, Smith is known for his versatility, color palette and realism--capturing every line of rigging, sail plan and line of a ship's hull with unerring accuracy that captivated brash sailors and the general public alike.

Perhaps best known for his majestic clipper ships along the New England shore, Smith was a prolific artist and illustrator whose subject matter went beyond his portrayal of the nautical world to include works depicting the great outdoors in a career that spanned both World War I and World War II and beyond.

Born in Whitman, Massachusetts in 1879, Frank Vining Smith summered on Cape Cod and made Hingham, Massachusetts his home. Unable to enter the Navy, he focused on painting--combining it with his love of all things nautical. Smith enrolled at the Boston Museum of Fine Arts and studied under Frank Benson, Philip L. Hale & Edmund C. Tarbell. He then studied at the Central Ontario School of Art in Canada and, finally, at the Art Students League in New York City.

Smith began working as an illustrator for the Boston Herald at the age of twenty-three and also executed many illustrations and paintings for the Boston Journal, Outdoors, Field & Stream, and Yachting. His illustrations came to define a generation enjoying the pastime of "leisure and the great outdoors." Many of Smith's illustrations are reproduced in this book for the first time.

At the age of 47, Smith was able to paint full-time. World War II brought a resurgence of patriotism and, for Smith, a broadening list of patrons and commissions. His clients included such captains of industry as Josiah K. Lilly Jr. (of Eli Lilly Pharmaceuticals fame), fine art connoisseur and museum founder Julian de Cordova and President Franklin Delano Roosevelt.

Smith's ability to transform a common scene of antiquity into a vibrant and modern one, garnered him critical and financial success during his lifetime. The extensive collection of works in this title is an invitation to rediscover Smith's admiration for maritime traditions and brilliance as an artist. The book can be ordered here: Frank Vining Smith at Amazon.

A comprehensive exhibition entitled "The Art of Frank Vining Smith" is scheduled to debut at the Heritage Museums & Gardens, June 26 through October 31, 2010.

Author James Craig was the associate curator for collections at the Cape Ann Historical Museum from 2003 to 2007. This is Craig's third title. Craig's Fitz H. Lane: An Artist's Voyage through Nineteenth Century America (The History Press, 2006) was awarded the Gloucester Historical Commission Preservation Award in 2007.

He is an independent consultant to fine art collectors, antique dealers and museums. He resides in Gloucester, Massachusetts.

Frank Vining Smith Maritime Painting in the 20th Century has it's own site where you can join the discussion of the artist and his work. Book design by Michelle Quigley.