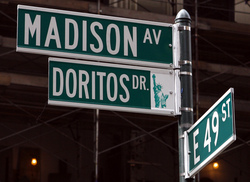 Doritos fans have shown they have the creativity and passion to compete at the highest level, and last year's success proved that their incredible talent can shatter conventional limitations and boundaries

After shocking the world earlier this year at Super Bowl XLIII when its consumer-created Super Bowl ad took the number one spot in USA TODAY's annual Super Bowl Ad Meter, the Doritos brand today announced it will once again turn over complete control of its Super Bowl air time to consumers, but is raising the stakes like never before. The brand will air three consumer-created :30 Doritos spots during the Super Bowl XLIV broadcast and give the winners $5 million if the homemade ads claim the top three spots of the USA TODAY Ad Meter.

In conjunction with this announcement, New York City's Madison Avenue - the iconic symbol of the advertising industry - was officially re-named to Doritos Drive yesterday in honor of the creativity and passion of Doritos lovers that changed the Super Bowl ad game last year.

As a gesture of thanks to the advertising legends that continue to inspire the brand's fans, free Doritos tortilla chips were given away throughout the day on Madison Avenue. And, since consumers have shown that Madison-Avenue creativity can come from anywhere, the brand also will send coupons for free Doritos chips to people across the country that live on a "Madison Avenue" as a salute to their dreams and an invitation to enter this year's contest.

"Doritos fans have shown they have the creativity and passion to compete at the highest level, and last year's success proved that their incredible talent can shatter conventional limitations and boundaries," said Ann Mukherjee, group vice president, marketing, Doritos. "We've had the honor of sharing our Super Bowl spotlight with some of our talented fans over the last few years, and our sincere hope is to once again provide a launching pad for more dreams to become reality."

During the Super Bowl XLIII broadcast in February 2009, a homemade Doritos commercial entitled "Free Doritos," made by Joe and Dave Herbert of Batesville, Ind. for less than $2,000, snagged the number-one spot on the USA TODAY Ad Meter, beating the seasoned ad pros that traditionally dominate the rankings. This marked the first time ever an amateur ad achieved such an accomplishment and a first top-ranking ad for the Doritos brand, which is a part of PepsiCo's Frito-Lay division.

This year, participants can upload :30 commercials that share their love for Doritos tortilla chips to http://www.crashthesuperbowl.com from September 21, 2009 to November 9, 2009 to be considered for one of the coveted spots that can change the lives of Doritos fans. To help entrants amp up their creative masterpieces, the site also houses a toolbox where Doritos logos, product shots, music and animations are available for download and use. In addition, Joe and Dave Herbert also will play a role in this year's program, serving as "mentors" to contestants through a series of fun tutorial videos featured on the contest's website.

Six finalists' ads will be announced in January 2010. Then it will be up to fans to vote for their favorite ads online and determine the three winning Doritos spots to air during the Super Bowl XLIV broadcast on February 7, 2010 on CBS. Each of the six finalists will win $25,000 and a trip to South Florida to attend Super Bowl XLIV in a private luxury suite at the game, where they will tune in to learn for the first time which ads won when they air for a worldwide audience. Beginning today, details about the advertising challenge are available at http://www.crashthesuperbowl.com .

Potential grand prizing for the contest will be based on each winning ad's ranking on the USA TODAY Ad Meter:

If consumer-created Doritos ads sweep all the top three rankings of the USA TODAY Ad Meter, an additional $1 million bonus will be awarded to each winner for a total prize giveaway of $5 million.

The USA TODAY Super Bowl Ad Meter tracks the second-by-second responses of a panel of viewers to ads during the national broadcast of the Super Bowl and ranks them favorite to least favorite. Created in 1989, USA TODAY's Ad Meter has been regarded as the most influential Super Bowl ad rating in the advertising industry.

Frito-Lay North America is the $12 billion convenient foods business unit of PepsiCo (NYSE: PEP), which is headquartered in Purchase, NY. In addition to Frito-Lay, PepsiCo business units include Pepsi-Cola, Quaker Foods, Gatorade and Tropicana. Learn more about Frito-Lay at the corporate Web site, http://www.fritolay.com and the Snack Chat blog, http://www.snacks.com .

PepsiCo offers the world's largest portfolio of billion-dollar food and beverage brands, including 18 different product lines that each generate more than $1 billion in annual retail sales. Our main businesses - Frito-Lay, Quaker, Pepsi-Cola, Tropicana and Gatorade - also make hundreds of other nourishing, tasty foods and drinks that bring joy to our consumers in over 200 countries. With more than $43 billion in 2008 revenues, PepsiCo employs 198,000 people who are united by our unique commitment to sustainable growth, called Performance with Purpose. By dedicating ourselves to offering a broad array of choices for healthy, convenient and fun nourishment, reducing our environmental impact, and fostering a diverse and inclusive workplace culture, PepsiCo balances strong financial returns with giving back to our communities worldwide. For more information, please visit http://www.pepsico.com .