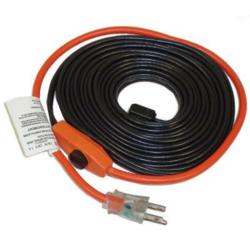 For those who don’t have a frost-free outside faucet, a frost cap will keep the faucet from freezing.

“For those who don’t have a frost-free outside faucet, a frost cap will keep the faucet from freezing,” says Bob Beall, the most referred plumber in the Pittsburgh Pennsylvania and Youngstown Ohio areas. Visit our booth at the Pittsburgh Irish Festival for a chance to win a $150 Steeler basket. See our website for details.

Mr Rooter Tip Of The Day

Tip #1 To install a frost cap, slip the oval end of the string inside the cap over the faucet handle.

“In the past,” according to Mr Rooter, “the use of heat tape was controversial because it cause fires.” Today’s low-wattage heat tape is less susceptible to overheating.

Tip #1 Use care to not wrap it on itself.

Tip #2 Keep its sensor tight against the pipe.

BONUS TIP: A space-age product called Frostex® used every inch of its cable as a heat sensor, and it could be wrapped over itself without fear of fire. It was available for many years at local hardware stores and was sold by the foot. But price increases have forced it into the large internet wholesaler market, now available only 100-ft. rolls. Though it is arguably the best designed heat tape, few people will buy a roll just to get 10 ft.

Tip # 1 To run a single-sensor heat tape, start by taping the sensor on the pipe.

Tip #2 Check manufacturer’s instructions. If allowed, tape the heat tape to the pipe at 12-inch intervals and wrap fiberglass insulation over the entire length.