Benjamin Taylor Lally of Burlington, MA is the winner of the seventh annual Wergle Flomp Humor Poetry Contest, currently one of the largest contests for humor poetry. The competition aims to raise awareness about vanity contest schemes by spoofing them. Vanity contests award meaningless "honors" to flatter poets into buying anthologies and other expensive personalized products featuring their work. Lally's winning entry, the Walt Whitman parody "First Edition, 2008", is published at http://www.winningwriters.com/contests/wergle/2008/we08_pastwinners.php 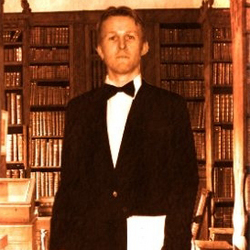 The Rape of the Cock: An Heroi-Comical Poem

Winning Writers is pleased to announce the results from its seventh annual Wergle Flomp Humor Poetry Contest. Benjamin Taylor Lally of Burlington, MA won first prize and $1,359 for his spoof poem, "First Edition, 2008". 838 entries were received from around the world.

The Wergle Flomp competition spoofs the low standards of widely publicized free poetry contests sponsored by Poetry.com, the Famous Poets Society, the League of American Poets, and similar operations (see our list of contests to avoid). These "vanity contests" typically award "semifinalist" status to most contestants to flatter them into buying expensive anthologies containing their poem, as well as personalized plaques, tote bags, trophies, and tickets to an annual convention ($595 apiece) where everyone receives an "award". In addition to wasting poets' time and money, vanity contests and their indiscriminate praise can keep beginning poets stuck at an unsophisticated level of writing. Once they find out they've been deceived, some poets give up on contests altogether, missing out on legitimate publication opportunities.

Wergle Flomp is the alter ego of British poet David Taub, who submitted several pieces of barely literate gibberish to Poetry.com, and received semifinalist form letters praising his "unique talent and artistic vision" and offering to include his work in the anthology Promises of Love. In that spirit, Winning Writers offers prizes for the most hilariously, deliberately bad poems to be sent to a vanity contest.

Jendi Reiter, judge of the Wergle Flomp contest, said of the winning poem: "Benjamin Lally's elaborate Walt Whitman parody mashes up familiar quotations with modern pop-culture references, while consistently maintaining a Whitmanesque grandiose voice and lust for life. I like how this poem builds momentum with ever-more-extravagant claims for the narrator's genius, yet never breaks character. Though it is recognizably a parody, it stands alone as a humorous poem in its own right."

Julie Porter of Montclair, NJ received second prize and $764 for "The Rape of the Cock: An Heroi-Comical Poem", a classical ode to Lorena Bobbitt. Sooja Jones of Thiruvananthapuram, India received third prize and $338 for "Daft Idylls", a monumental riff on Wordsworth's "Daffodils" in which a fawning representative of Poetry.com offers fame and fortune for the narrator's poetic flatulence, or "borborygmi". Twelve honorable mention prizes of $72.95 each were also awarded. All prizewinners are published online at WinningWriters.com, along with twelve finalists. The total prize pool of $3,336.40 makes Wergle Flomp one of the largest competitions for humor poems.

The Wergle Flomp Humor Poetry Contest is sponsored by Winning Writers. Submissions for the 2009 contest are accepted now through April 1, 2009. Entries are accepted online at WinningWriters.com. There is no fee to enter.

About Winning Writers, Inc.
Winning Writers is today's leading source for poetry contest information. We are proud to have been selected as one of the "101 Best Websites for Writers" by Writer's Digest for four years in a row (2005-08). Our online database, Poetry Contest Insider, ranks and profiles over 750 poetry contests and over 300 prose-only contests. Our free email newsletter offers news about free poetry contests and quality literary resources.

Winning Writers was founded in 2001 by Jendi Reiter and Adam Cohen. Learn more at http://www.winningwriters.com/

Benjamin Taylor Lally of Burlington, MA, winner of the seventh annual Wergle Flomp Humor Poetry ContestBenjamin Taylor Lally teaches high school English in Massachusetts, and wishes to dissuade his creative writing students and poetic ramblers from imitating the style found here. His less ridiculous poetry has been accepted by The Formalist, the Illinois State Poets' Society and Troubadour, and has been rejected by many, many other places. In the photo, Mr. Lally can be seen relaxing in the library of his winter estate in Essex.

Jendi Reiter is the judge of the Wergle Flomp Humor Poetry Contest Jendi Reiter is vice president of Winning Writers, editor of Poetry Contest Insider, and judge of the Winning Writers poetry contests. Ms. Reiter has been entering and winning literary contests for over 15 years. Her work has appeared in Poetry, The New Criterion, First Things, Hanging Loose, Cider Press Review, Southern Poetry Review, Grasslands Review, Best American Poetry, and many other publications. She has won two awards from the Poetry Society of America, Lyric Magazine's College Poet of the Year Prize, the Mildred Werba Poetry Prize, the Olay Fine Lines Poetry Contest, and a National Endowment for the Humanities grant for poetry criticism. Turning Point Books published her first book of poetry, A Talent for Sadness, in the fall of 2003.

Winning Writers has been selected as one of the "101 Best Websites for Writers" for four years in a row by Writer's Digest (2005-2008)Writer's Digest writes, ''Gain access to 150 poetry contests by subscribing to its free e-newsletter (and more than 750 if you upgrade to its premium membership). Plus, enter its famous Wergle Flomp Humor Poetry Contest, which searches for the 'best humor poem that has been sent to a 'vanity poetry contestÂ as a joke.'''