Sheado.net, Best Known for Their Virtual Pet Game, Furdiburb, Will be Going to the 2013 Game Developer Conference

Furdiburb®, a combination of virtual pet, adventure, and puzzle game, is developed by the indie game company Sheado.net. It is family-friendly and available for Android™ devices, NOOK Family of Devices by Barnes & Noble, and Amazon devices; for more details, please check out the company site at http://www.Sheado.net/pet. 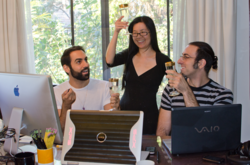 It sounds silly, but the stickers will serve as ice breakers as we meet other developers at the conference.

This March, Team Furdi from Sheado.net will be attending the Game Developers Conference (GDC) in San Francisco. The team hopes to meet other small independent developers and share insights about developing for multiple mobile platforms. Also on the agenda will be spreading the word about their virtual pet game, Furdiburb, and learning best practices for bringing the game to the iOS platform.

"I'm so happy we're going to GDC!" exclaimed Alice Lo, developer and composer. "It is a milestone for us - a measurement of how far our company has come. We don't know a lot of people in the gaming industry, so this is our chance to meet like-minded indie developers and to learn as much as we can about anything in the field."

The team has also printed dozens of Furdiburb stickers to distribute at GDC. "It sounds silly, but the stickers will serve as ice breakers as we meet other developers at the conference," commented Chad Ata, lead developer. "Previous attendees of the conference often mention that the greatest advantage of going to GDC is learning from and collaborating with other developers - and that's what we hope to do during our week in San Francisco."

"I look forward to being between other game developers, the big guys and the small fries," commented Danny Ata, artist. "I want our team to feel a part of the videogame industry, and hopefully we'll get to network and learn something along the way. Witnessing all the game development that's going on in one place will be a really good experience to put things into perspective. I'd love to meet game artists, attend talks, and see how others bring their ideas to life."

About Sheado.net
Founded in 2010 by two guys and a gal with the mission of "making the world a happier place - one app at a time". Currently targeting Android™ devices, Sheado.net is dedicated in creating rewarding and enjoyable experiences for users of any age.

Home ScenePlayers adopt, raise, and care for the alien virtual pet by first hatching Furdiburb from an egg.

Broken SpaceshipIn front of the broken spaceship, Furdiburb snuggles with a teddy bear and...wait, is that a Neapolitan poop on the side??

Crabidab's ShopCrabidab's Shop is full of antenna and eyeball mutations for Furdiburb. Players can customize their virtual pet's looks.