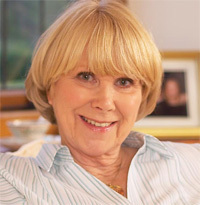 Retirement should provide the opportunity to relax and enjoy a stress-free life. I believe a Golden Living apartment offers this and more, and I am delighted to be associated with the team.

Wendy Craig, best known for her roles in classic British sitcoms, has been unveiled as the new face of Golden Living endorsing the company's stylish retirement apartments.

The BAFTA award-winning actress's ambassadorial role will see her attending all of Golden Living's developments in person as the company continues to expand their retirement apartment portfolio in 2008.

Golden Living, part of Woodford Group PLC, provides privately owned, secure retirement living in desirable locations for people over 55. The company prides itself on an attention to detail that provides quality apartments that are built for retirement.

Trevor Walters Thompson, Golden Living's Managing Director, said: "We believe that Wendy Craig is the perfect ambassador for Golden Living because she exudes professionalism and has a fondness in the hearts of the British public that has been built over a number of years.

"Wendy understands and believes in what we are doing, about the quality of the product and the liberating influence one of our apartments can offer," he continued.

Wendy Craig, who is currently finishing her seventh series of 'The Royal', is well known for her high-profile roles including the hit television series' 'Not in Front of the Children' and 'Butterflies'.
Her sparkling career in film, television and on the stage has seen her claim numerous prestigious awards including a BAFTA for 'TV Drama Actress of the Year' in 1969 and the Variety Club's 'Personality of the Year' also in 1969 and 1973.

Wendy Craig, said: "When I was initially approached to endorse Golden Living, I was impressed with attention to detail. The apartments they are offering are built in great locations and everything they are providing is very well thought out."

She continued: "Retirement should provide the opportunity to relax and enjoy a stress-free life. I believe a Golden Living apartment offers this and more, and I am delighted to be associated with the team."

Wendy Craig will be attending all of Golden Living's developments in person, starting at the company's first development Roseberry Mews in Nunthorpe. Wendy will also be appearing at Ancholme Mews in Brigg, Hailgate Mews in Howden, Stonedale Mews in Haltwhistle and a yet to be named development in Pickering.

Born and bred in County Durham, Wendy Craig has benefited from a long and distinguished career in film, television and theatre. Currently finishing her seventh series of 'The Royal', Wendy Craig is also renowned for her roles in 'And Mother makes three', 'And Mother makes five' and 'Nanny' as well as 'Butterflies' by Carla Lane and 'The Servant' for which she received a British Academy Award nomination.

Currently aged 73, Wendy Craig is the widow of musician and journalist Jack Bentley and has two sons, Alaster, an oboist with the Birmingham Royal Ballet and Ross, a writer and business man.

Made up of one and two-bedroom apartments, the developments have communal areas such as a residents' lounge, a laundry room and a guest suite. Security is paramount - features include secure door entry, CCTV, 24-hour Careline, a resident estate manager, smoke alarms and emergency lighting.

The company's headquarters are in Leeds.

Woodford Group PLC is one of the fastest growing specialist brownfield acquisition, remediation and development companies in the UK.

Placed 7th in Sunday Times Profit Track 100 in 2006 with a profit of ï¿½15.2m - growth of 125% per year, Woodford are the only company ever to have improved their performance three years in a row.

The company has offices in Glasgow, Leeds, Birmingham, Newcastle, Yarm, Cambridge, London and a Head Office in Preston.

Woodford provide a full, in-house service from land buying to sign off of sites fit for residential or commercial building.

Woodford Land, the land acquisition and remediation arm of the Group has extensive experience of returning previously unusable land to public use through their in-house remediation experts.