Authors announce the release of ‘Bullion’ and ‘Oro En Lingotes’. 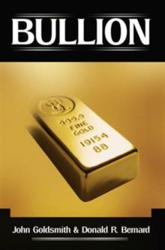 In “Bullion” and “Oro En Lingotes”, the new autobiographical novel written in both English and Spanish by John Goldsmith and Donald R. Bernard, readers uncover an insightful, firsthand perspective of shady dealings in the international gold market.

In “Bullion” and “Oro En Lingotes” (published by iUniverse), the new autobiographical novel written in both English and Spanish by John Goldsmith and Donald R. Bernard, readers uncover an insightful, firsthand perspective of shady dealings in the international gold market.

It was probably the greatest private hoard of gold in the world, which the American underworld had accepted as collateral for a loan that was in default. Two men were separately commissioned to secretly sell the gold to private investors to avoid a crisis on the world gold market. They found themselves in competition with a major international bank which saw an opportunity to manipulate the market fix of the century: the Gold Rush of 1979. The price of gold doubled in less than three weeks, an event as sensational as the Wall Street Crash.

According to Goldsmith, Bernard lived most of the events that happen in the books. “We could hire some writer to turn the story into a novel,” the main characters write in the epilogue. “Okay, he’d have to hype up the action, disguise the identity of the bank, invent a lot of it – but the core, the market manipulation, he could expose in detail.” It is this that Goldsmith and Bernard achieve in their novel.

About the Authors
John Goldsmith was born in London in 1947, and educated at Winchester and at the University of Aix-Marseille. He is the author of four novels, and he has written several children's books, as well as "Voyage of the Beagle," a story about Charles Darwin. Goldsmith has also done scripts for many television series.

iUniverse, an Author Solutions, Inc. self-publishing imprint, is the leading book marketing, editorial services, and supported self-publishing provider. iUniverse has a strategic alliance with Indigo Books & Music, Inc. in Canada, and titles accepted into the iUniverse Rising Star program are featured in a special collection on BarnesandNoble.com. iUniverse recognizes excellence in book publishing through the Star, Reader’s Choice, Rising Star and Editor’s Choice designations – self-publishing’s only such awards program. Headquartered in Bloomington, Ind., iUniverse also operates offices in Indianapolis. For more information or to publish a book, please visit iuniverse.com or call 1-800-AUTHORS. For the latest, follow @iuniversebooks on Twitter.