In Time for the 50th Anniversary of the Vatican II, New Book 'The Good Pope' is a Comprehensive Profile of Pope John XXIII

Ahead of the 50th Anniversary of Vatican II and the likely canonization of Pope John in 2013, 'The Good Pope: The Making of a Saint and the Remaking of the Church— The Story of John XXIII and Vatican II' is a comprehensive profile of the remarkable man who fought to open his ancient Church to the modern world. 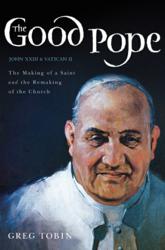 The Good Pope: The Making of a Saint and the Remaking of the Church--The Story of John XXIII and Vatican II by Greg Tobin

In The Good Pope, author Greg Tobin profiles the extraordinary life of Pope John XXIII, a peasant-priest who became a beloved Pope, and a “gentle revolutionary” who opened the doors of the Catholic Church to meaningful and necessary change.

He was called Il Buono Papa, “the Good Pope.” He was both a superstar—ranked among the likes of Elizabeth Taylor, Richard Burton, and John F. Kennedy—and a revolutionary, convening the Second Vatican Council in 1962. In 2000, he was named “blessed” by Pope John Paul II, the penultimate step toward sainthood. But for a man that grew up alongside the farmer-peasants of Northern Italy—far outside of the inner circles of Roman power—he was not only a long-shot for the papacy, but an unlikely candidate as one of the most influential forces on the contemporary Catholic Church.

In The Good Pope (September 25, 2012; Hardcover), author Greg Tobin profiles the extraordinary life of Pope John XXIII, a peasant-priest who became a beloved Pope, and a “gentle revolutionary” who opened the doors of the Catholic Church to meaningful and necessary change. Following his footprints throughout the twentieth century, from his upbringing and early church career to his surprise election as pope and stunning decision to convene the Second Ecumenical Council of the Vatican, Tobin examines how Pope John’s legacy of tolerance and openness continues to influence generations after generations of Catholics.

From 1958-1963, a time of great political upheaval and sweeping social change, Pope John helped guide the Church through Communism, the Cold War, the arms race, and a population explosion throughout the Third World. And in convening the historic Second Vatican Council, he shattered expectations of an uneventful pontificate and advocated for great reform, leading to many changes in the liturgy and the role of the church within the secular world.

In The Good Pope, Greg Tobin presents the authoritative biography of Pope John XXIII, a unique character of humility, humor, and sanctity who offered his life “for a good outcome of the ecumenical council and for peace among men.” Offering, in addition, an in-depth examination of the groundbreaking Vatican II, Tobin reveals how the rejection of the Good Pope’s reforms has led to the many of the crises facing the church today.

About the Author
Greg Tobin is vice president for university advancement at Seton Hall, in charge of the fundraising, communications, marketing, government relations and alumni relations offices. He is the author of The Wisdom of St. Patrick, Saints and Sinners, Holy Father (a biography of Pope Benedict XVI), and co-general editor of Religion in America. He has been featured widely in national and international media, including The New York Times, CBS, MSNBC, Fox News, and countless radio stations. He lives in West Orange, New Jersey with his wife and sons.

About Pope John XXIII
“In spite of his farm-bred love of land and custom, John XXIII was, in the best possible sense, a revolutionary—a Pope of modernization who kept in continuity with the church's past, yet made even the most enlightened of his 20th century predecessors seem like voices of another age.”—TIME Magazine

“[Pope John XXIII] impressed the world with the friendliness of his manner which radiated the remarkable goodness of his soul. . . . Everyone remembers the image of Pope John's smiling face and two outstretched arms embracing the whole world.”
—Pope John Paul II, upon the beatification of Pope John XXIII

"The most amazing new force in world affairs is that simple, friendly, unpretentious man, the Pope of Rome, age 81. In 1958 John XXIII set in train a series of events which have since moved that huge old galleon, the Roman Catholic Church, back into the mainstream of world history and have profoundly altered the silhouette it presents to
mankind."—LIFE Magazine

THE GOOD POPE
The Making of a Saint and the Remaking of the Church—The Story of John XXIII and Vatican II
By Greg Tobin
HarperOne, an Imprint of HarperCollinsPublishers
October 2012 | $26.99 | Hardcover| ISBN: 9780062089434