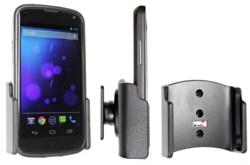 We are still testing, but we do plan to release holders that support Qi wireless charging in the near future.

ProClip released its Nexus 4 car phone holders in January, but recently added more holders to their website. Initially, ProClip released Nexus 4 holders for phones that don’t utilize any cases, covers or skins. They do offer adjustable holders that can accommodate a variety of different size cases, however, the Bumper case from Google is a popular case for the Nexus 4 and ProClip decided to make custom holders for it.

The Nexus 4 Bumper case is for sale on the Google Play Store. The case provides a layer of protection around the edge of the phone and on the glass back without adding a lot of extra bulk, which is part of the reason why the case is so popular.

Don Rankin, COO of ProClip USA says “The Nexus 4 is currently a top competitor in the Android market, so it’s no surprise we saw the demand we did. If the demand exists, we strive to release holders for all new phones and mobile devices.”

ProClip also notes the high demand they’ve had for Qi wireless charging holders, including one for the Nexus 4. So far, no holders have been released.

Rankin says, “This is a new and exciting thing for us. We are still testing, but we do plan to release holders that support Qi wireless charging in the near future.”

ProClip USA company philosophy is to provide customers with a high quality product with a high level of customer service, the same level of quality they expect from the vehicles and devices they are already using. To learn more, visit http://www.proclipusa.com or email customerservice(at)proclipusa(dot)com.