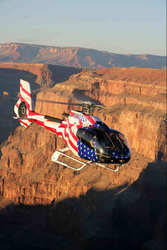 Toast the Spirits of the Grand Canyon

The “Toast the Spirits of the Grand Canyon” helicopter tour has become the number one seller at TourGuy.com, a new tour and travel source for adventure and ecotourism tours launched during National Travel And Tourism Week.

The Grand Canyon Helicopter Tour takes up to six passengers from Las Vegas to the Grand Canyon for a champagne picnic lunch, which is served at the base of the West Rim of the Grand Canyon. The exclusive tour, descends 3,200 feet below the rim to land on an area designated by Hualapai Indians.

“When we launched TourGuy.com, we decided to feature this tour because I always considered it a once-in-a-lifetime experience for most people,” says James Hoke, president of TourGuy.com, LLC. “What I especially love about the tour is its minimal impact to the environment. Some of the surrounding area at the landing site hasn’t been touched by humans in one hundred years.”

Hoke says the reason for this is the isolated location of the landing site, which is protected from over visitation by the Hualapai Indian Reservation. Concerns about noise pollution are also non-existent because the tour operator employs the Eco-Star EC 130, which is considered by many to be the greenest helicopter on the market.

“Having been on champagne picnic tours before the Eco-Star EC130, I am still amazed by the difference,” said Hoke. “The initial design was to meet some of the strictest noise pollution standards at the Grand Canyon, which are among the most stringent in the world. The outcome was a quieter ride for tourists.”

According to American Eurocopter, which manufactures the EC130, the operation noise reduction is attributed to the automatic control over the rotor RPM. The helicopter is quiet enough that California’s Long Beach Police Department also uses it for stealth operations.

The total Las Vegas Helicopter Tours time is approximately four hours, with 70 minutes of flight time. The Eco-Star EC130 is also noted for having comfortable seats, bigger cabins, and a better view with stadium-style seating for passengers. Bigger windows also enhance the experience, giving every passenger a better view than traditonal tours could provide.

The tour is narrated in English, Spanish, Japanese, and Chinese. Timed to correspond with the flight, the narration points out dozens of historic landmarks, including dead volcanoes that helped shaped the landscape.

TourGuy.com is the newest tour and travel reservation service with the lowest prices. It offers a variety of tours, ranging from one-and-a-half hours to two days. Group tour arrangements are also available.