Over 50% of cruise ship passengers say that their favorite island was Grand Cayman and that they plan to visit there in the future. World class snorkeling, great roads, clean water, and low crime make the Cayman Islands the most popular islands in the Caribbean. Airlines have recently expanded direct flights to the island. At the same time the airlines are cutting service to the other islands. 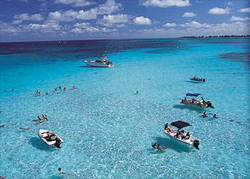 Grand Cayman is a Warm Respite in US Winter

Compared to the other islands, Grand Cayman is safer, the water is cleaner, the roads are great, and the crime rate is low. People here are friendly too - and all of that attracts more visitors to the Grand Caymans.

Grand Cayman Villas and Condos, a company that brokers Grand Cayman rentals, reported recent airline expansions that make the island closer than ever. Combined with other benefits, Grand Cayman is the most popular destination in the Caribbean.

There is a lot of bad news coming out of the US lately. The country is being hit by a cold winter and a down economy. However, demand for Grand Cayman rentals and vacations remain strong. "We have had very few cancellations due to the economy or job loss this year. Every single oceanfront villa and upper end condo on 7 Mile Beach is rented for the week of New Years," said Jim Leavitt, Principle of Grand Cayman Villas and Condos. He notes that "Grand Cayman Island is a great place to escape the Winter cold. Right now the weather is in the 80s most days. The water is a warm 80°."

It's also easier to get to Grand Cayman. While airline flights to other islands in the Caymans have recently been scaled back, flights to Grand Cayman have expanded. Cayman Airways now flies direct from Chicago, Washington D.C. (Dulles) and New York (JFK). US Airways also has two flights from Charlotte and one from Philadelphia on Saturdays.

Year-over-year airport arrivals are up 10% in Grand Cayman. "People are not traveling to the other islands in the Caribbean as much, so airlines have cut routes there. But they've added flights to Grand Cayman. You can now get to the Cayman Islands is just five hours from the east coast (of the US)," said Leavitt.

Grand Cayman is the most popular Caribbean island. Over 50% of cruise ship passengers say that their favorite island was Grand Cayman and that they plan to visit there in the future. There are many reasons for this. "Compared to the other islands, Grand Cayman is safer, the water is cleaner, the roads are great, and the crime rate is low. People here are friendly too - and all of that attracts more visitors to the Grand Caymans."

A benefit of a weaker US economy is that there are often more options available to vacationers. Each villa that Grand Cayman Villas & Condos offers is owned by an individual owner. Some owners are willing to offer greater flexibility right now. They are giving more options on changeover days, additional services and amenities. Sometimes there are breaks on rental rates.

Winter is an especially popular time to visit Grand Cayman. With new airline flights, all visitors need is a passport and they can soon enjoy the warm weather on the island.

About Grand Cayman Villas & Condos
Grand Cayman Villas & Condos is an agent for rental properties on the Cayman Islands. As an agent for rental homes, GCV&C finds rental properties for an agreed-upon rate. The company has a strong relationship with the Cayman Island Department of Tourism and makes referrals for destination weddings, corporate events, dining, and entertainment on the islands. All properties are visited by the company and are government inspected and licensed.