An exhibit of sacred art - "Arcanum Angelorum"("Mystery of the Angels") - with works by Guillermo Esparza, award-winning, internationally recognized American iconographer, painter, and sculptor, will be displayed in St. Patrick's Old Cathedral. The opening reception is on Thursday, February 26 from 6 to 9 pm and the show will run through July 31, 2009. The exhibit will commemorate the 200 year anniversary of the Cathedral in the historic district of SoHo in New York City and the restoration of the tabernacle of the church by the artist-in-residence, Guillermo Esparza. The exhibition will feature recent paintings of angels in oil, icons in egg tempera and gold, drawings, as well as sculptures and mural designs. 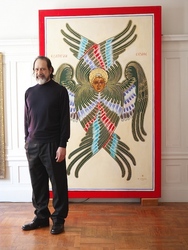 Guillermo Esparza in his studio in front of his Green Seraph painting, photo credit Gil Ortiz

The dust is sealed into the painting under a layer of white pearlescent paint,'' Esparza says.

An exhibit of sacred art - "Arcanum Angelorum"("Mystery of the Angels") - with works by Guillermo Esparza, award-winning, internationally recognized American iconographer, painter, and sculptor, will be displayed in St. Patrick's Old Cathedral. The opening reception is on Thursday, February 26 from 6 to 9 pm and the show will run through July 31, 2009. The exhibit will commemorate the Bicentennial Celebration of the Cathedral located in the historic SoHo neighborhood in New York City and the restoration of the tabernacle of the church by the artist-in-residence, Guillermo Esparza. The exhibition will feature recent paintings of angels in oil, icons in egg tempera and gold, drawings, as well as sculptures and mural designs. The exhibit will take place in the undercroft of the Old Cathedral in the Holy Name Chapel, opposite 263 Mulberry Street.

The artist's works are in the permanent collections at the Vatican Museum in Rome, the Phanar Museum in Istanbul, Turkey, the US National Archives, the Smithsonian American Art Museum, as well as numerous cathedrals, churches, museums, and private collections. Guillermo Esparza, is considered a visionary in the world of public art in the US, is the first recipient of the "Percent-For-Art" public commission from the State of Arizona in 1986, thus opening the door to the next generation of artists competing for public commissions. His permanent installations of sculpture, monuments, and murals are located throughout the US. Guillermo Esparza works in the figurative manner, drawing from Byzantine, Classical and Alexandrian influences to create an original conception of light and color. An observer of natural phenomena, his work is infused with poetic reasoning and the constant movement of light on forms.

"According to early Christian history, the tradition of iconography was established approximately 1,000 years before the Renaissance," says Esparza. "It is based on golden-mean proportions and related geometry, Byzantine modules, exact anatomy, inverted perspective, and perspective perspective. In my works, I strive to preserve the traditions of the medieval painters. What inspires me is light penetrating transparent colors of egg tempera, reflecting back from the gesso ground. In sculpture, it is the super emanating light coming from white marble, reflecting the heart of the shellfish: fiat lux."

Guillermo Esparza began his career as an environmental sculptor, creating public fountains and monuments in the Southwest. He came to New York in 1988 to learn the art of the Orthodox. After extensive study of scripture and sacred art, he spent many years in the restoration of churches and icons for the Byzantine Catholic Community. He studied iconography with Michael Joseph Dudick, Bishop of the Byzantine Catholic Metropolitan Church of Pittsburgh, the U.S. branch of the Ruthenian Catholic Church. Mr. Esparza, an ecumenicist, has been awarded important commissions by churches of many denominations, and his original works are installed in Episcopal, Roman Catholic, and Greek Orthodox Churches. Some of his other works are influenced by epic poems of Western culture, and are part of many public and private collections.

Msgr. Donald Sakano, present Pastor of St. Patrick's Old Cathedral, has been an important patron, friend, and spiritual advisor to Guillermo Esparza for many years. They were involved in several projects, including a recent restoration of the historic icon of Our Lady of Perpetual Help that was installed in the transept of St. Patrick's Cathedral on Fifth Avenue at its dedication, and is now at the Church of the Holy Innocents on West 37th Street. The building of the shrine and the icon restoration has been commissioned by Msgr. Donald Sakano. Mr. Esparza recently restored and gilded the tabernacle and ciborium in St. Patrick's Old Cathedral, once again under the guidance and patronship of Msgr. Sakano.

Guillermo Esparza has also worked closely with another important supporter and patron of his studio: businessman and philanthropist Michael Parlamis of New Jersey. One of their projects is a 60-foot Peace Dove mural that is installed at the Peace Memorial Gymnasium adjacent to the St. John the Theologian Greek Orthodox Cathedral in Tenafly, NJ. The mural was commissioned by Mr. Parlamis and his relatives to commemorate the victims of the Lockerbie terrorist attack. Mr. Parlamis' niece, Alexia Tsairis, died aboard Pan Am Flight 103 in 1988. Guillermo Esparza was working on the dove at his studio when the World Trade Center was attacked. The windows were blown out and a cloud of dust filled the studio, a block from the Twin Towers. Some debris and dust attached itself to the canvas where it remains today. "The dust is sealed into the painting under a layer of white pearlescent paint,'' Esparza says. "The dust came in and there is no going back. Once it came in, it was on the painting. I took it to the cathedral and unrolled it there on the floor and the parishioners came there to touch it.'' The mural was blessed by His Eminence Archbishop Demetrios in 2002, and by His All Holiness Bartholomew I in 2004.

Guillermo Esparza's present studio is located at Greek Orthodox Church of the Annunciation on Upper West side in Manhattan. He is currently designing and painting large murals and executing the restoration of the icons of the Iconostasis, and is establishing the artistic archives of the Church.

Guillermo Esparza's monumental sculpture of Archangel Michael, which he carved out of Vermont marble, is installed at S.S. Peter and Paul Byzantine Church in Somerset, NJ. Mr. Esparza designed and built the Shrine as well, including carved glass doors and icons. The sculpture took two years to carve, and was blessed by Bishop Michael Joseph Dudick.

Another major work by Guillermo Esparza in New York area is his original Mural Icon of the Pantrocrator, 15 foot by 20 foot painting in oil and 24 karat gold on Belgian linen. It is installed 60 feet above the nave of the Cathedral of the Incarnation in Garden City, and is a gift from the Very Rev. Robert V. Wilshire, who served for 20 years as Dean of the Cathedral, seat of the Long Island Episcopal Diocese. Dean Wilshire died on July 22, 1999. The Rt. Rev. James Cordone and The Rt. Rev. Orris G. Walker Jr., Bishop of Long Island, were instrumental in having this project funded and realized.

Guillermo Esparza creates monumental and small sculpture in a variety media including marble, bronze, silver, stone, cast stone, glass, wood and terracotta. In his paintings and icons, he uses egg tempera, oil, watercolor and gold leaf. He grinds and prepares all colors and gessoes in the studio, and uses the ancient Byzantine canon of sacred geometry, proportion and multi-perspective philosophy in his work. Mr. Esparza was born in San Antonio, Texas, and raised in the San Francisco Bay area. He is married to Maria Andriasova Esparza, a renowned Moscow-born concert pianist, daughter of the great Soviet composer, Iosif Andriasov. In 1995, Ms. Andriasova was invited to perform at the Gala concert dedicated to His Holiness Pope John Paul II's visit to the United States to commemorate the International Year of the Family and to celebrate the friendship between the United States and the Vatican. At this event she met her future husband, Guillermo Esparza, whose Ecumenical sculptures were commissioned by Archbishop Iakovos, Former Archbishop of the Greek Orthodox Archdiocese of North and South America, funded by the American Greek Orthodox community and a Catholic community of the US. His Emminence Archbishop Iakovos presented the silver sculptures to the representative of the Ecumenical Patriarchate. The Ecumenical Patriarch Bartholomew I, on his historic visit to the Vatican, presented the sculpture to His Holiness Pope John Paul II, and kept the other sculpture at the Phanar in Constantinople. Maria and Guillermo Esparza live and work in Manhattan. .

The exhibition will feature recent paintings of angels in oil, icons in egg tempera and gold, drawings, as well as sculptures and mural designs by Guillermo Esparza

Sculpture of The Archangel Michael of the Apocalypse