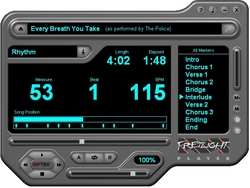 Since M-Player's PC release over two years ago, Macintosh users have been demanding a solution that they can use too

Working in conjunction with a Mac and a Fretlight 400 Series guitar, the world's first real computer-powered teaching guitar, M-Player enables everyone from beginner to advanced level guitar players to shave weeks off the time it historically takes to learn to play a new song. It is ideal for Guitar Hero or Rock Band video gamers who want to learn to play their favorite songs on a real guitar.

M-Player for Mac works by lighting up the chords and scales on the Fretlight guitar, showing correct finger placement. It comes complete with seven popular MIDI demo songs with hundreds of popular songs available individually or in bundles, including the likes of The Beatles' Black Bird, Kid Rock's Picture and U2's Where the Streets Have No Name. Users can not only hear the song and see the chords and scales light up on the guitar, but learning is made easier with the ability to slow down the tempo, loop sections, create custom markers or solo different instruments. M-Player for Mac features include the following:

"Since M-Player's PC release over two years ago, Macintosh users have been demanding a solution that they can use too," said Rusty Shaffer, President & CEO. "With more and more guitar players using Macs to record, edit and produce music, it is our goal to make all of our software Mac-compatible by late 2008."

Connected via the USB port of a Windows PC or Mac and driven by software, the Fretlight guitar allows users to learn, memorize, and play a variety of rhythm and lead guitar for mastering classical, blues, rock, country and heavy metal music. With the ability to create or learn guitar music at the user's individual pace, the Fretlight interactive system is designed to help players at every level.

About Optek Music Systems, Inc.
Founded in 1988 and headquartered in Reno, NV, Optek Music Systems, Inc. is a privately held music education company whose products are available via their web site and through music retailers and distributors throughout the world. Thousands of users have experienced the educational power of Optek and their products. They have several U.S. and international patents as well as patents pending for advanced guitar learning systems and musical instrument manufacturing designs.