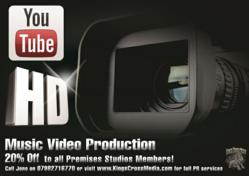 The video makers at the Premises Studios are real professionals and it’s been a pleasure to work with them to bring my music to life.

Hoping to make a name for himself in the hip hop industry, Christopher Mungai (aka Coolibop) recently moved from Kenya to London and has teamed up with Kings Cross Media to produce his first hip hop music video clip.

Coolibop, a talented rapper and producer, has been making music since he was a teenager, and previously released the song Beatbox which received airtime on Kenya radio stations. The song is the first release on his debut mix tape titled The Coolest Son. The song features Young Kass, a Kenyan-based rapper who is a member of the popular band Camp Mulla, a group nominated for a Black Entertainment Television award.
To produce his first music video clip, Coolibop turned to Kings Cross Media's music video production team, located in the Premises Studios building.

“The videomakers at the Premises Studios are real professionals and it’s been a pleasure to work with them to bring my music to life,” Coolibop said.“

The artistic, trendy Hackney Road neighborhood serves as the backdrop to Coolibop’s video. The constant movement of the video perfectly complements Coolibop’s rhymes with the urban art streetscape scenes, providing a multi-media experience of graffiti art and hip hop.

The Premises Studios is located in the heart of London’s East End and for 25 years, has hosted a who’s who list of musical talent that includes the likes of David Gray, Madness, Taj Mahal, Amy Winehouse, Adele and Bloc Party. Along with rehearsal space, the studio offers a wide range of mixing and editing services to meet virtually any budget. Kings Cross Media has staff to assist clients with video production, editing and post-production tasks.