With a defiant attitude embracing the pure essence of riding, the new Iron 883 is the latest Harley-Davidson Dark Custom motorcycle. 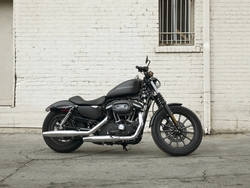 With a defiant attitude embracing the pure essence of riding, the new Iron 883 is the latest Harley-Davidson Dark Custom motorcycle.

Harley-Davidson Sportsters like the Iron 883 have stood against the grain since their introduction in 1957, when the modern rebel culture was being bred from restless veterans and hot rod pioneers. Sportsters became the starting point for many legendary choppers of the 1960s, while also getting pumped up for championship dirt racing and dare devil stunt riding in the 1970s.

The Iron 883 keeps the rebellious fire burning with responsive handling, smooth clutch effort and durable carbon reinforced drive belt while pushing the styling of motorcycling minimalism to the edge. Decked in black from fender-to-fender, the new Harley-Davidson Iron 883 brings the beat of an 883 Evolution engine backed up by a combo of gritty, old-school garage features like front fork gaiters, drag style handlebar and side-mount license plate.

"The Iron 883 is a bike that provides a pure riding experience and gives its owner a platform for personalization," said Mark-Hans Richer, Harley-Davidson Chief Marketing Officer. "It's totally open to the creativity of the rider."

The black powder-coated 883 cc Evolution powertrain with black covers takes the Iron 883 deep into the heart of darkness. With Electronic Sequential Port Fuel Injection (ESPFI) and performance tuning with a flat torque curve, the Iron 883 delivers plenty of power for the city scene. The pipes on the straight cut shorty dual exhaust flow the distinctive American V-Twin sound. A ticket to ride the Iron 883 starts at just $7,899 MSRP, leaving plenty of freedom for customization.

A classic Sportster solo seat with a height of 25.3 inches fits the lone rider, while a passenger seat and a backrest in complementing black finishes can be added as accessories.

As the latest of the Harley-Davidson Dark Customs, the Iron 883 is stripped down and ripe for custom creativity. Soul mates of the Iron include the Nightster, Night Train, Cross Bones, Fat Bob and Street Bob. Check out more on Dark Custom motorcycles at http://www.harley-davidson.com/darkcustom.

The Iron 883 is available in Black Denim and Brilliant Silver Denim colors.